The Galician Coast: A Coruña

During my first stay in Galicia, on the Camino de Santiago, I was constantly impressed by the beauty of the landscape and the charm of the culture. Granted, in Galicia you will find little of the world advertised by Spanish postcards. Here there are no Moorish palaces or olive trees, but granite huts and rolling grass hills. Instead of scorching the earth, the sun hides behind clouds. Here the people play the bagpipes rather than flamenco.

Yet if I were forced to choose any part of Spain as my favorite—no easy task—I would decide on Galicia. For me the region has a strange romantic charm that never fails to get under my skin. The deep green of the landscape, the mild weather and overcast skies, the grey granite rock that so abounds—all this gives Galicia a lush, rugged, and ancient aspect that I find deeply appealing.

And this is not to mention the Galician culture. Despite their reputation for being a reserved people, every Galician I have met has invariably been warm and welcoming. I am even fond of the accent, which is distinguished by its throaty pitch and sing-song tone. As in all the north of Spain, the food in Galicia is rich, hearty, and delicious—with high-quality beef and seafood—and, here more than elsewhere, very affordable too. Indeed, in general Galicia is an extremely economical place in which to travel and live, which is no small thing.

Though the interior of Galicia is charming in the extreme—a seemingly endless bucolic pasture, filled with fields and farmers—the province cannot be properly appreciated without a visit to its coast. The granite geology of the region has resulted in one of the most dramatically beautiful coastlines in a country known for its beaches. So, without further ado, here are Galicia’s two biggest coastal cities: A Coruña and Vigo. 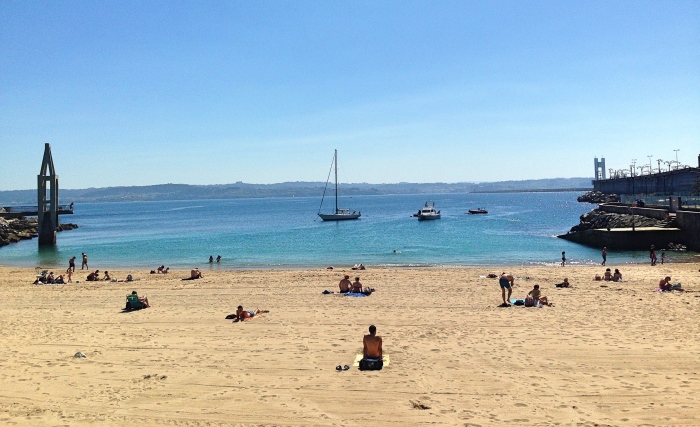 It is not clear where the name of A Coruña came from. It is not even clear what to call the city: officially it is A Coruña, but many Spaniards call it La Coruña. (“A” is the Gallego word for “La,” or “the.”) In Roman times the city was known as Brigantium, named after the Brigantes, one of the Celtic tribes that once populated this region.

Indeed, you may be surprised to know that, back in the foggy mists of time, the Celtic peoples dominated this grassy region. It is due to this fact that bagpipes are part of traditional Galician culture; and this is just one example of a surviving remnant of that ancient race. Galicia even officially joined the Celtic league—along with Scotland, Wales, Ireland, Cornwall, Brittany, and the Isle of Man—in 1986, only to be kicked out a year later because the Celtic language has gone extinct here.

Nevertheless, Galicia does have its own language, Gallego, which is one of the four official languages of Spain. A Romance language closely related to Portuguese, the language is widely spoken and used in daily life in Galicia, though admittedly not as much as Castilian. During the nationalizing currents of the Enlightenment the language almost went extinct, but underwent a revival, or Rexurdimento, in the nineteenth century. Not coincidently, this was also the age of Catalan’s Renaixença, as people responded to the Romantic emphasis on local, rural cultures.

I got off the night bus from Madrid in A Coruña at around seven in the morning, cramped, cold, and exhausted. It was Holy Week and at least it wasn’t rainy. After nursing a coffee and dropping off my things at the Airbnb, I walked towards the peninsula that forms the city’s old center.

Though there are no spectacular buildings to be found, I found the center of A Coruña an enchanting place to stroll about. Narrow streets open up into ocean views; seagulls constantly float past on the seaside breeze. 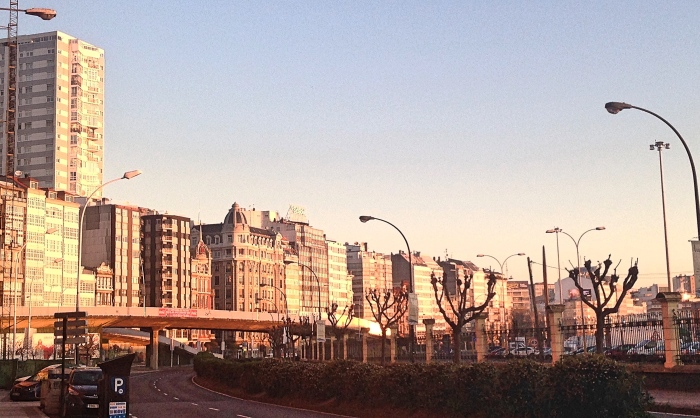 Most distinctive are the glass balconies, called galerías, that hang over the streets. These can be seen all around A Coruña’s central square, the Plaza de María Pita, where the stately city hall presides. Incidentally, this square is named after a local heroine, who helped to defend the city from an English attack in 1589. This brave action was rewarded with a military pension by Philip II; and her Gallego battle cry—Quen teña honra, que me siga, “Those who would have honor, follow me”—is still well-known. 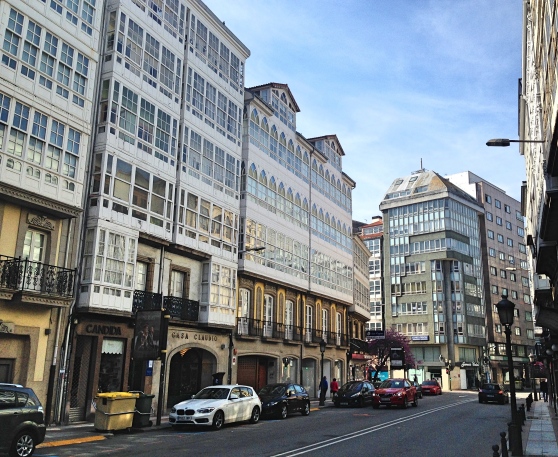 The glass balconies are even more apparent on the seaside avenue, Avenida Marina, one of the most picturesque parts of the city. From there I walked to the Paseo Maritimo, one of the longest maritime promenades in Europe. Handholding couples, sweating joggers, and spandex-clad cyclist went by, while old men waited next to fishing lines for an aquatic nibble. Across the water I could see the green hills on the other side of the bay. I especially appreciated the elegant forms of the rust-colored streetlamps that adorned the street. 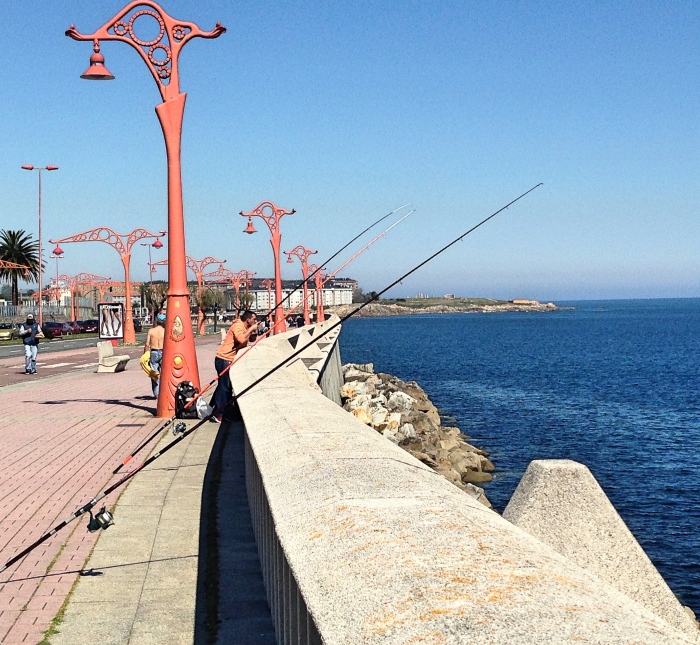 Walking on this way, I eventually reached the park at the end of the peninsula. Here is where A Coruña becomes truly grand. The grassy hills slope down into a craggy mound of rock, lapped by the ocean tides. Statues and megaliths dot the grass, in a playful imitation of Stonehenge amid the English countryside. A curious structure is the Casa das Palabras (House of Words), a kind of enclosed courtyard of obvious Moorish inspiration. An informational plaque declares that it was the burial ground of Muslim soldiers who died in the Spanish Civil War, whose bodies have since been relocated. According to the website, the current function of the building is to serve as a meeting point between different cultures, though it doesn’t look like it gets much use.

The star attraction, of course, is the Torre de Hércules, or the Tower of Hercules. A legend tells that the Greek hero battled a monster on this spot for three days until finally slaying the beast; then he buried the monster’s head underground, and ordered a city to be built. The coat of arms shows the severed head of the vanquished foe, upon which the Tower of Hercules shines proudly.

The tower not for defense, but is a lighthouse, probably the oldest continually functioning lighthouse in the world—a fact that earned it the status of UNESCO World Heritage in 2009. Built in the 2nd century by the Romans, it is the only Roman lighthouse to survive the centuries. Yet the graceful form that greets the eye nowadays—sprouting 55 meters, or 180 ft, into the air, making it the second-tallest lighthouse in Spain—owes far more to the Enlightenment-era reconstruction, completed in 1791 by Eustaquio Giannini. Inside the structure the Roman masonry survives, though it does not look like much to the untrained eye. In any case, the fact that the Romans would need a lighthouse on the remote northwestern edge of the Iberian peninsula speaks for itself.

The lighthouse is best appreciated from across the park’s little bay. From there you can see the dramatic rise of the rocks out of the water, like the back of some scaled beast, ascending into a gently sloping grassy hill, the cool green speckled with yellow flowers—all culminating in the tan tower standing high above the waves. After I walked over to inspect the tower, I sat myself on some of the rocks overlooking the sea in order to read a little. I was in the middle of Oswald Spengler’s The Decline of the West. In one part Spengler says that Western man’s deepest urge is to be alone with infinity; and as I sat above the crashing waves, looking out at the ocean beyond, I felt the strange peace of being a silent witness to something far bigger than myself.

The other major sight in A Coruña is the Monte de San Pedro, which is quite a walk from the city center. On the way there, I passed A Coruña’s massive beach, which sits on the northern side of the peninsula. Though technically divided into two beaches, the Orzán and Riazor, it forms one continuous spread of sand. The view from the far end, facing the peninsula, is astonishing in the vast sweep of shore curving into the distance. You may also pause to observe the hulking form of A Coruña’s football stadium.

The most stylish way to go up the hill is via the glass elevator on the northern side. The elevator ascends diagonally up the hillside, going slowly enough to give the visitor a chance to peer out of the glass ball at the ocean scenery. But I was in the mood to walk, so I took the long way around, trekking all the way around the hill before going up from the southern end. 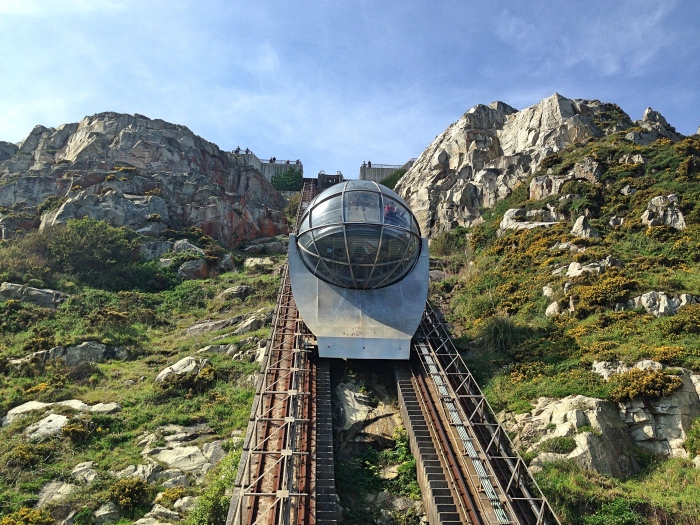 The Monte de San Pedro sits strategically over the bay, giving a wide visibility in many directions. This is why it was made a naval fortress during the twentieth century, though it never saw any actual fighting due to Spain’s neutrality in the World Wars. Now the big bunkers and guns form part of a park, their gargantuan barrels slowly rusting away—which is the best thing a gun can do, really. The main attraction, however, is simply the view. From the western side one can see the Galician coastline, with a group of four flat, rocky islands off the shore. From the east all of A Coruña is visible, with the Tower of Hercules standing proudly from across the bay. 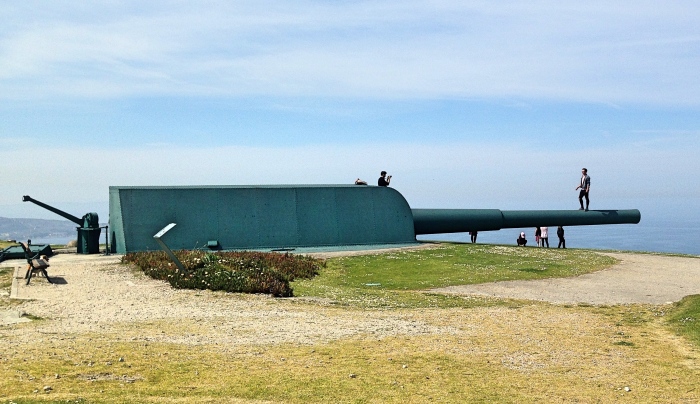 These are just some of my fondest memories of A Coruña. The city is easily among the finest costal cities in the north of Spain, one to which I would gladly return.

2 thoughts on “The Galician Coast: A Coruña”