A Report on the Battle of Jarama

Today I went on a school trip to learn more about the Battle of Jarama, an important and bloody battle of the Spanish Civil War, which took place near my high school. We went with a group of Spanish and Dutch students, who are visiting for the week in an exchange program.

It was, incidentally, amusing to see the students side-by-side—the blond northerners and the dark-haired Mediterraneans. It was one of the first nice days of the year. The Dutch, for whom it was as hot as summer, were wearing bright colors and short sleeves, while the Spaniards felt fine in long-legged pants and dark colors. Climate does make a difference. Another contrast I noticed was how the two groups spent their time. The Spaniards sang together on the bus rides, while the Dutch took every opportunity to play games involving touching their hands and feet together in a rhythm; the boys played slap and the girls a game like patty cake.

Our first stop was at the Arganda Bridge, now called the Puente de la paz by residents of the town. It is an old steel bridge that runs over the Jarama River. In the past it formed part of the highway between Madrid and Valencia; but now it sits, alone and unused, near the Rivas lagoons, while cars buzz by on the new highway in the distance.

To understand the importance of the bridge, a little historical background is required. After the commencement of the military coup, in 1936, the government of the Republic relocated to Valencia in order to get away from the front lines of the fighting. Franco’s forces soon almost entirely surrounded Madrid, hoping to take the city. The highway to Valencia then became the city’s only lifeline. Thus the road was heavily defended by Republic forces. The Jarama River, which ran alongside the highway, formed an important natural barrier that could be used in its defense. In this area only three bridges crossed the water, of which the Arganda Bridge is one.

To illustrate how crucial was this crossing, it suffices to know that it was over this modest bridge that the paintings of the Prado were carried during their evacuation to Valencia. According to our guide, the trucks couldn’t even fit on the bridge, so the paintings had to be taken out and moved by hand. Later on, during the Battle of Jarama itself, the Republican forced tried to destroy the bridge; but their explosives failed to break or dislodge the structure. As a result, on February 11th Nationalist forces successfully crossed and established a bridgehead. 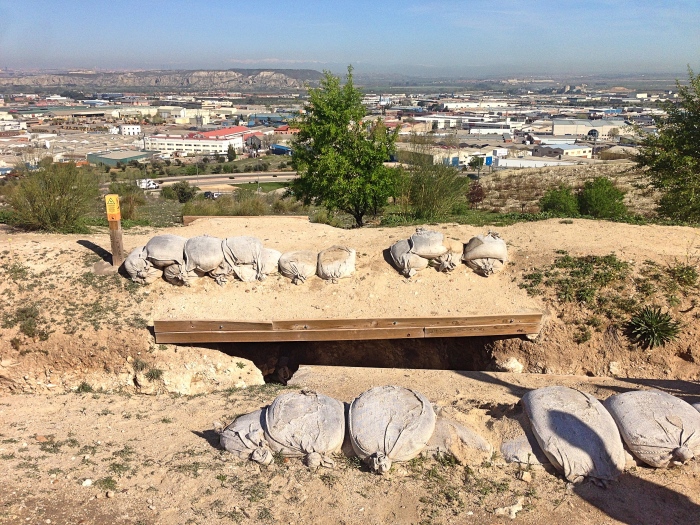 From this bridge we went to the Cerro Melero, a hill near the Hospital Universitario del Sureste. There you can find an open-air museum that preserves some of the trenches used in the Republican line. These trenches formed the second line of defense, in case of a Nationalist attack on the city of Arganda del Rey. The eminence offers a commanding view of the valley below; standing there, you can almost see the enemy forces scrambling underneath you. To protect from aerial attacks (both German and Italian fighter pilots participated in the battle), the trenches were built with an air raid shelter 32 meters long. Standing on other side of the hill is a sculpture of a cube split in two, symbolizing the Civil War. On its base is inscribed a fragment of Pablo Neruda’s famous poem, España en el corazón, lamenting the war.

Our next stop was the memorial to Suicide Hill. This morbid name comes from the brigade of British soldiers who sustained heavy loses defending the hill. According to our guides, these volunteer fighters were barely trained and poorly equipped; and they were up against seasoned veterans of Spain’s wars in the north of Africa. Nevertheless, they fought stoutly, holding off the enemy forces from taking the nearby village of Morata while losing over half of their 600 men. A stone cairn was the only thing to mark this spot for many decades, formed spontaneously by visitors piling up rocks. Yet repeated vandalism—a problem for any monument to the war, since it is still deeply controversial in this country—prompted some locals to invest in permanent masonry, so that it at least cannot be easily knocked over.

Not far from here the American volunteers, called the Lincoln Brigades, fought and also suffered heavy losses. One of the survivors, Alex MacDage, wrote lyrics to the tune of “Red River Valley” commemorating the event; and some years later Woody Guthrie recorded the song, which begins thus:

There’s a valley in Spain called Jarama
It’s a place that we all know so well
It was there that we gave of our manhood
And there that our brave comrades fell.

We walked from this point to the Cota 700, a hill named for its height of 700 meters above sea-level. There we found some stone fortifications still standing from the Republican front line. The guide explained that the machine gunners were stowed in chambers separated by strong stone walls, so that if a bomb struck one of them it would not take out the rest.

Across the valley we could see the hill of Pingarrón, which was controlled by the Nationalist forces. After the halt of the Nationalist advance (largely thanks to the brave fighting of the International Brigades), the Republican forces repeatedly tried to counterattack and take this hill. Yet the lack of cover between the two lines—only a few scrubby olive trees—and the strong Nationalist artillery made it impossible.

Not far from here, surrounded by fields of olive trees used as hunting grounds, is another monument. Standing on a stone base is a sculpture of two giant hands, one covering the other. This is the work of Martín Chirino, a sculptor from the Canary Islands. It represents the open palm of the fascist salute united with the communist fist, symbolizing the unity of the opposed sides. As with everything related to the war, it has proven controversial. Its base is frequently vandalized with spraypaint, so that somebody must come regularly to paint over the political graffiti. The statue is certainly not calculated to please many, since supporters of neither side are inclined to see each other with sympathy. After all, by now both have felt the sting of defeat, the Republicans after the war itself, the Nationalists after the fall of Franco’s regime.

Our last stop was in the little town of Morata de Tajuña, in a charming restaurant and inn called the Mesón El Cid. Apart from the restaurant, terrace, and pool, the establishment has two free museums: one dedicated to the ethnography of local agricultural ways, the other dedicated to the Battle of Jarama. These are both the work of Gregorio (Goyo) Salcedo, a mustachioed man, now over seventy, who is from this area. His interest in history was sparked by necessity. Growing up in the harsh and scarce times after the war, when the economy was in the doldrums and hunger was common, he and his father and brothers would collect old guns, shells, and equipment from these battlegrounds to sell for scrap. “If the war was hard, so was the postwar,” he said in a newspaper interview; “it was another war.”

Soon he became interested in these artifacts for their own sake, and began collecting them. As his collection grew, so did his network, as former soldiers and their relatives got in contact with him. Eventually he converted an old garage into a museum, and quite an impressive one. There are thousands of photos, along with stories of individuals who fought and died in the battle. There are pieces of artillery and anti-aircraft, helmets, shells, uniforms, gas masks, guns, knives, flags, and every other manner of war paraphernalia. There is even a reconstruction of a Civil War-era schoolroom. That all this was collected, catalogued, and displayed by one man, is a testament to how much a private citizen can do for the sake of history. It is by far the best and most complete exhibition related to the Civil War that I have seen in Spain.

Like the sculptor Chirino, Salcedo strives for neutrality. As he says in that same interview: “Here there are no sides; all were human beings who fought, suffered, and died. We cannot forget that in war we are all victims, we all lose.”

Like so many battles, the Battle of Jarama was as inconclusive as it was bloody. Despite thousands of casualties on both sides and weeks of fierce fighting, the Nationalists did not break through and the Republican forces did not retake their lost ground. The war shifted elsewhere in the country, and the front largely held until the conflict’s final stages. Yet the soldiers who gave their lives to prevent the nationalists from cutting off Madrid—especially the foreign soldiers, poorly trained and equipped, who chose to come to Spain to fight against fascism—cannot but inspire the visitor with their example of moral and physical courage.