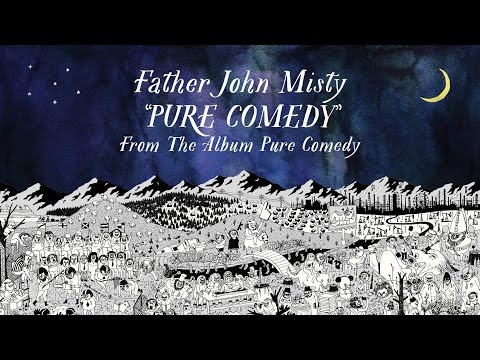 “Another white guy in two thousand seventeen / Who takes himself so goddam seriously.”

Like nearly all the music I like, this album was introduced to me by my dad. He sent me the recent New York Times article about Father John Misty’s new album.

I hadn’t been listening to much music, and expected very little—especially from a guy called Father John Misty. (His real name is Joshua Tillman.) But by the first lines of the opening number, I was entranced: “The comedy of man starts like this / Our brains are way too big for our mother’s hips.” In short, this is the best album I’ve heard in a long while. So here I am, writing my first album review, since apparently I can’t appreciate anything without rating and analyzing it anymore.

Tillman’s music is striking for the discordance between his dark, sarcastic, and at times apocalyptic lyrics, and his lighthearted musical sensibilities. He is, of course, not the first artist to play with the juxtaposition of lyrical and musical style; Randy Newman is an obvious comparison. Yet Tillman does this not only for comedic effects, but because it allows him to examine the themes that pervade his music: disorientation, everyday despair, the nefariousness of the normal. For Pure Comedy is a true concept album, and its message is arguably more important than its melodies.

This is not to say his melodies aren’t lovely. Tillman has a knack for writing tunes that sound “classic”—many of them could have been written anytime between the 1960s and the present day—while not being derivative or gimmicky. Instrumentally, he mostly sticks with what you can find in any bar band: horns, piano, guitar, drums, backing singers. He has enough harmonic sophistication to avoid dullness, while keeping his tunes singable and straightforward. As a vocalist he is also impressive: a strong and soulful baritone, capable of a dulcet falsetto, which he uses to good effect. His time in Fleet Foxes does seem to have left its mark, most noticeably in his penchant for using the wordless “Oohhh” as a chorus.

While musically gifted, Tillman’s real talent, I think, is as a lyricist. His lyrics are uniformally well-crafted—witty, aphoristic, memorable, and hard-hitting. He has a talent for epigram: “The only thing that makes them feel alive is the struggle to survive. But the only thing they request is something to numb the pain with.” His lyrical power does not come from absurd imagery or fantastic wordplay, but from the force with which he hammers his main themes. There is little oblique in Tillman; for all his hipster cleverness, he does not mince words: “They’re just like the ones before, with their standards lower, another concert goer will pay you to believe.”

One of the major themes in this album is religion. Tillman, who was raised in a profoundly religious family, is nowadays nearly as caustically atheistic as Richard Dawkins: “And how’s this for irony? Their idea of being free is a prison of beliefs that they never ever have to leave.” And yet while Dawkins is so often petulant and conceited on this subject, Tillman manages to escape the unpleasantness of sophomoric arrogance by turning his sarcasm upon everything else in sight: atheism, music, pop culture, consumerism, hipsterdom, intellectualism, the avant garde, technology, and himself: “One side says ‘Ya’ll go to hell.’ The other says ‘If I believed in God I’d send you there.’”

The most persistent feeling that this album instills is a profound and overwhelming disgust with the modern world: “Some dream of a world written in lines of code… Some envision a state governed by laws of business.” In this I am reminded most strongly of George Grosz’s paintings of life in Berlin in the 1920s: fat, stupid, pig-faced caricatures of the German middle class marching through city streets, the brutal thoughtlessness of modern life, the omnipresence of newspapers filled with malevolent lies and irrelevancies, and the constant need of diversions—drink, smoke, gambling, war—to make life tolerable.

Tillman approaches this feeling very nearly in his music video of the title track, “Pure Comedy.” The video alternates between footage taken from news programs, documentaries, YouTube videos, and other found sources, interspersed with very Groszian drawings, by Matthew Daniel Siskin, of demon-toothed and overweight cretins dancing on a dying earth.

I admit that I can’t watch this video without an overpowering feeling of horror. Clips of newscasters reading nonsense from teleprompters, a man eating mass-produced pretzels and filling up his car with gas—cute animal videos, internet memes, infomercials, televangelists, product reviews, sports matches, natural disasters, and of course the revolting face of the current president—all this combines to produce a terrifying sense of the banal. All of these are things we spend so many hours consuming; they form the very fabric of modern life. And yet how meaningless, pointless, totally bereft of intelligence they are.

But if Tillman’s point was just this, a disgust with the modern world, he would be little more than a puerile complainer (as I am). His album has a positive thrust, too, and ironically enough it is religious in its simplicity. For Tillman, the main culprit of the world’s ugliness is fear: fear of the unknown, fear of pain, fear of suffering, fear of death, fear of rejection, fear of losing, fear of each other. We elect tough-talking rulers to make us feel secure from aliens, we invent gods and religions to make the chaos of reality seem organized, we spend our lives plugged into technological hubs where we can experience reality at a distance, polished, cleaned, and most of all, safe.

The antidote to this fear, Tillman thinks, is empathy. It is a message summed up long ago by E.M. Forster: “Only connect.” Or, in Tillman’s words, “I hate to say it, but each other’s all we’ve got.” Nationalism, religious bigotry, pop culture, entertainment—all of these are things that divide us, and they do so by preying on our fears: of foreigners, of infidels, of being uncool, of discomfort, of missing out. The comedy—the purest comedy, as Tillman sees—is that, by dividing ourselves this way, we create the very things we fear, and deprive ourselves of our most precious resource: each other.

Beneath all the garbage of our daily discourse are people—lonely, scared, starving, insecure—and these people, all of us, have found themselves in a universe seemingly indifferent to their environment: “this bright blue marble orbited by trash … this godless rock that refuses to die.” This is the basic reality. And yet we do all we can to cover up this basic reality, inventing a hundred ways to turn our eyes from it—virtual reality, highbrow art, lowbrow art, sports, TV, and yes, music—a hundred excuses to deny our basic identity with other people, and a hundred ideologies to pretend that reality is somehow other than it so manifestly is: “Just waiting for the part where they start to believe they’re at the center of everything, and some all-powerful being endows this horrorshow with meaning.”

Even so, if this album were just a sort of secular soul-music, a gospel for the godless, it would probably be intolerably preachy. Tillman escapes this pitfall (partially, at least) with his 13-minute long “Leaving LA,” the centerpiece of the album. Musically, it is bare: featuring just Tillman slowly strumming a few basic chords and singing a simple tune. There is no chorus, and no bridge. A gorgeous string arrangement—both haunting and tender—is the only thing that saves the song from musical monotony.

Lyrically, however, “Leaving LA” is masterful: “Some ten-verse chorus-less diatribe” in which Tillman turns his own sardonic wit upon himself. He imagines himself as an aging folk-rock star, disparaging younger groups; in his fantasy future he is tremendously successful, a “national treasure,” and yet still a phony: “Closing the gap between the mask and me.” He speaks of his insecurity: “Until I figured, if I’m here I just might conceal my lack of skill here in the spotlight.” He describes himself as “Merely a minor fascination to manic virginal lust and college dudes,” and then predicts his fans will “jump ship” after hearing this song.

This self-deprecation, and self-awareness, is probably the album’s saving grace, what prevents Tillman from seeming like a curbside apocalyptic preacher. Since one of Tillman’s biggest targets is the entertainment industry—even entertainment as a concept, which he dedicates a whole song to attacking—how can he, a songwriter and musician, do his job in good conscience? As an artist, what can he do? Can music shock its hearers into wakefulness? And, by extension, can we listen to his music in good conscience without thinking about what he’s saying?

His answer is that he, and us, are all to an extent complicit in all of the things we like to deprecate. We are all participating in this universal banality. But how can we stop? Self-deprecation seems like a good first step, at least. And in that spirit, I suppose I should end with Tillman’s “Ballad of a Dying Man,” a song which perfectly encapsulates all the self-appointed cultural critics, the snobby know-it-alls, and the internet gurus: including me.