A train trip brought me from A Coruña, at Galicia’s northern tip, to the region’s southwestern edge: Vigo. The city sits on the southern side of a sizable estuary, the Ría de Vigo, which makes for an excellent port. This, and the city’s advantageous position on the Atlantic, has rendered it the commercial hub of Galicia.

The city’s name comes from Latin, vicus spacorum, or “small village,” as the Romans had a fortress here. A legend tells that Isabel the Catholic, after winning a battle against the Galician nobility, ordered all the olive trees in the region to be uprooted; but one stubborn tree in Vigo resisted. Thus the city’s nickname is La ciudad olívica, or “The Olive City” (though I don’t remember seeing any olive trees); and the city’s coat of arms features the famously resistant plant.

As I had just left A Coruña, that city of glass balconies and open parks, Vigo could not help but strike me as grey and industrial by comparison. The biggest city in Galicia by population, Vigo has a busy port and a thriving shipping business. It is a city of working people, with the architecture to match. Even its historic center gives the impression of being somewhat run-down and neglected.

Nevertheless, a walk through the city was not without its visual pleasures. In one traffic circle, a column of metal horses ascended into the air. Empty factory buildings—the windows smashed, the walls vandalized—foregrounded a splendid ocean view. As I walked along the port I observed the slumbering ships and the skeletal cranes standing by, the gateway to an ocean world I barely know.

I want to pause to single out the Bar Carballo for special praise. I ate there twice, and both times was totally satisfied. The tortilla de patata is perfectly creamy, and the empanadillas—meat-filled pastries—are easily the tastiest I have ever tried. Best of all, the food is extremely filling and cheap. If I lived in Vigo I would be a regular.

Eventually my walk along the port led me out of the city center. Soon I found myself surrounded by a tree-filled park, which then opened up to reveal Vigo’s massive beach, the Praia de Samil. The sand extends 1,115 meters, or almost a mile; and on the day I went, in mid-April, it was totally covered with people.

I must admit that beaches inspire mixed feeling in me. On the one hand there is the natural beauty—conspicuous in the Praia de Samil, with its views of the Cíes Islands. There is also the human spectacle of beachgoers, which cannot but tickle the fancy of anyone with anthropological curiosity. On the other hand I feel uncomfortable in the face of so much exposed flesh, frying in the sun. And the sublimity of the winds and the waves is, for me, disturbed by the legions of people yelling, running, splashing, and playing games. In sum, I like to observe beaches but I do not like being on them. This is in marked contrast to most Spaniards, of course, who generally love beach holidays. And thank heavens they do, since their country has some of the finest beaches in the world.

Speaking of fine beaches, Vigo is home to a beach even lovelier than the Praia de Samil: the Praia das Rodas. Indeed, in 2007 The Guardian even proclaimed this beach the best in the world. But to get there you must take a ferry, since it is on the Cíes Islands that sit in the estuary a few kilometers off shore. These three islands are Monteadugo (“sharp mountain”), Montefaro (“lighthouse mountain”), and San Martiño (“Saint Martin”). The first two essentially form one continuous island, since they are connected by their shared beach.

With an area of 4.4 square km, and an official population of three (the guards), the islands have never been important human settlements. But it is an important seagull settlement—in fact providing a home for the largest colony of seagulls in the world. Aside from the beaches, the surface of the island is mostly covered with eucalyptus and pine trees, blowing in the strong ocean winds. And I have read that the whales and sharks enjoy prowling in the water surrounding the islands—though I did not see any gargantuan backs or ominous fins emerging from the waves on my trip.

Due to the islands’ small size and status as a nature reserve, the number of visitors per day is strictly limited to 2,200 people. Thus I recommend booking a spot on a ferry in advance. (I should also note that these ferry companies only operate during Holy Week, when I went, or in the summer months.) But do yourself a favor and give yourself more time on the islands than I did. Thinking that they were small enough to see in a couple of hours, I only gave myself a short window with which to explore the islands; and the ferry company did not let me change my return time. I did have enough time to see everything, but no time to simply sit and enjoy the justly famous beach.

I arrived at the port, picked up my ticket from the booth, and boarded the ferry. The trip lasted about fifteen minutes, which was enough time to give half of everyone on board a sunburn. As we approached the islands, the Praia das Rodas came into view. It was almost as lovely as The Guardian’s rapturous description: “a perfect crescent of soft, pale sand backed by small dunes sheltering a calm lagoon of crystal-clear sea.”

The lagoon referred to is a feature of the beach’s location between two islands: Water laps the shore on both sides of the sand, the one open to the ocean, the other sheltered with a stone walkway that breaks the waves. I would think that this situation could easily lead to erosion, moving or even destroying the beach; but what do I know about these matters?

Aside from its terrific natural beauty—the water as blue as a postcard, the sand pretty enough to star in a movie—the beach benefits from the limited number of visitors. Visitors are sprinkled at wide intervals over the beach, allowing for calm enjoyment of the scene.

The visitor can explore the two islands, Monteadugo and Montefaro, using walking paths that lead up and into the interior. At times it is easy to forget that one is on an island, so completely do the trees close out the sea. But then the trees give way to reveal a commanding view of the surrounding ocean. Monteadugo is the larger island, and thus has more ample walking space. Yet Montefaro is also worth exploring, if only for the winding, stair-like path that leads up to the commanding lighthouse at its highest point. 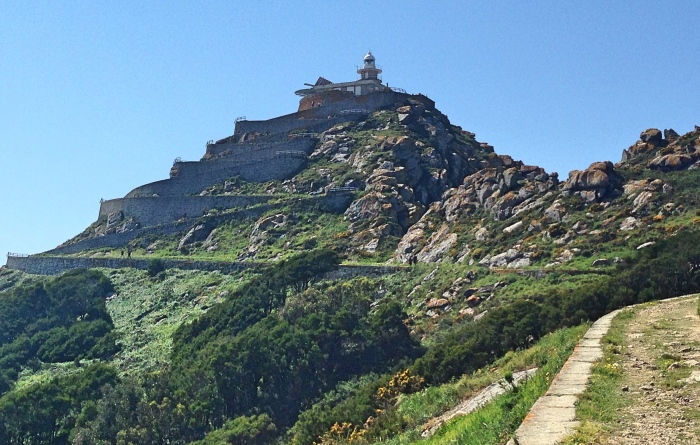 By the time I had walked the distance of these two islands, the hour of my departure was nearing, and I had to rush back to the ferry. I was sad to go. Every inch of the islands is attractive; and the relative lack of people makes it possible to enjoy the scenery without disturbance.

The ferry deposited my back in Vigo, where I had dinner and went to sleep. The next day I was taking the train to Oporto, just a hundred miles or so south of Vigo. But that is for another post.