Early in the morning, we took a train from Madrid to this splendid city. Ávila is the capital of its eponymous province. The city sits in the south of the autonomous region of Castilla y León, and houses a population of 60,000. Of course, I didn’t know a thing about the place when I booked the trip, but by now I’m sure you’ve come to expect that.

The train ride was stunningly lovely—certainly one of the most beautiful, and least expensive, in Spain. The train made its way northwest of Madrid, passing town after town until we got to Escorial. The monastery looked inconceivably majestic in its perch among the mountains, a brooding symbol of Spanish authority.

By now we were in the Guadarrama mountains. Through the window I could see valleys far below us, green but nearly treeless. In the distance the rising sun hung above the horizon, glaring yellow. Underneath was a sea of fog sitting at ground level. Occasionally a derelict farmhouse or a stone fence could be seen, and once or twice I spotted a few cows looking tiny and delicate in the valleys below—but for the most part the view was unmarked by human habitation. We passed through several tunnels, and eventually a city could be seen up ahead, which grew nearer and nearer until the train slowed to a stop.

We were in Ávila. We walked out of the station and into the city center, and in just five minutes we were face to face with the one of the gates of the city walls. It was an impressive sight: two towers flanked the door, two rows of battlements above.

I imagined what it would have been like to be the poor soldier trying to break in these walls. Arrows, stones, and spears would rain down soon as you came near—death from above. It would be a pretty wretched day. I wonder how generals went about conquering places so well-fortified? The only safe way seems to be a siege: starve them out, rather than risk a confrontation. Then I tried imagining what it would be like to be an average citizen, stuck inside a besieged town, watching the supply of grain and fresh water gradually dwindle. War is hell for soldiers and bystanders both.

We walked around the wall until we found the entrance to climb up. A few euros exchanged hands, and soon we were standing on the walls of Ávila. They are impressively well-preserved. To my eye it seemed that they could’ve been built just last week; I saw no signs of damage or wear. But according to Wikipedia, they were constructed from the 11th to the 14th centuries. The walls are thick and tall, and seem strong enough to withstand even a cannonball—not that I’d know. We walked and walked, circumnavigating half the town. Red-thatched roofs of houses stood in the foreground, while in the background, far away, thin white clouds hovered over the mountains.

GF absolutely loved the walls. She smiled like a five year old at an amusement park as she peered through the battlements, her hair waving in the wind. I was in a bad mood again: I was hungry. I absolutely hate being hungry. I’m ashamed to say this, because it underscores how easy and prosperous my life has been, but I feel acutely miserable if I wait too long between breakfast and lunch. I get so sour that even the most interesting and joyful experiences seem dreadful.

So as soon as we had walked the kilometer of wall from start to finish, and climbed up and down our fair share of stairs, we headed to a restaurant. And for whatever reason, I decided that we would go to the top-rated restaurant in the city: El Restaurante Bococo.

We sat down for the menú del día—which was a bit pricey, but not overly so. Little did I know what awaited me.

First the wine. Two orders of the menú came with a bottle of wine included; and since GF can’t drink (it’s genetic), it was up to me to drink all of it. Granted, we didn’t have to order it in the first place; but I’ll be damned if I pass up a free bottle of wine. We didn’t have all day, so I had to drink pretty quickly. Bottoms up.

Then the food. As usual, I nibbled on the bread as soon as it was brought out. Normally, the portions in Spain aren’t that big (for an American) so I don’t worry about filling up my stomach a bit. But I knew I was in trouble when our first dishes were brought out. Each of them was big enough to share. After eating both—a soup with pork, sausage and beans, and fried eggs with pieces of foie gras over potatoes—I was comfortably full.

Then our main dishes arrived. We had both ordered steaks, and they were massive. I was determined not to let any of the food go to waste, so I started determinedly stuffing piece after piece down my throat, hoping to outrace the signals of distress emanating from my stomach. Steak, wine, steak, wine, until my stomach felt like it would burst. Then, I ate some more.

By the time all the food and wine was done, I was in misery. I stood up to go, and I was so full of food and wine that I could hardly suppress my groans as I shuffled across the room and out the door. I pride myself in being an atypical American, but in this respect I am as American as can be. Bill Bryson, in his Notes from a Small Island, put it best:

To an American the whole purpose of living, the one constant confirmation of continued existence, is to cram as much sensual pleasure as possible into one’s mouth more or less continually. Gratification, instant and lavish, is a birthright.

But I had to pay a price for this pleasure, since the rest of the day I could hardly move or think.

Still, though I was in pain, I was agreeably buzzed. This made the Cathedral of Ávila particularly moving for me. It’s a Romanesque church, built around the same time as the walls. In fact, the cathedral was built into walls, making it a fortification as well as a house of God. The cathedral itself has a square, imposing, massive quality. Its plain grey façade is hardly enlivened by decoration. 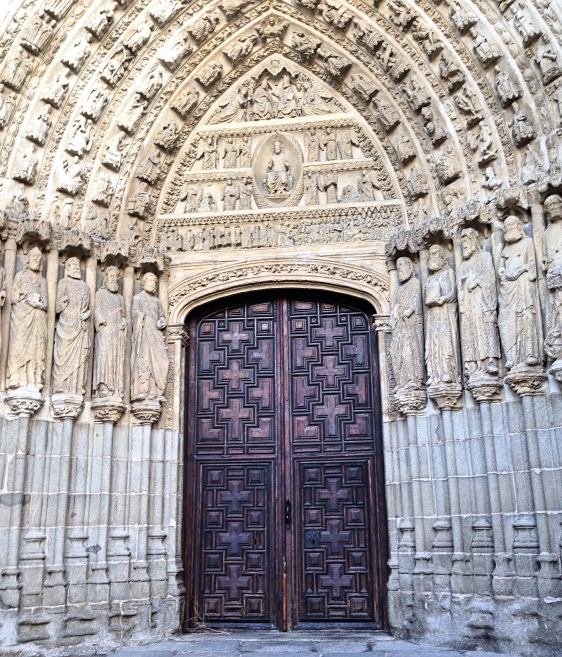 I found the gothic north door of the cathedral particularly impressive. As in many cathedrals, the doorway is surrounded by concentric arches, which are filled with figures. Long, drawn-out statues of saints sit below, each of them dressed in a robe; and above, within the arches, tiny seated and standing figures fly over you like little angels. In the center, above the door, is the Last Judgment. At this time, Jesus wasn’t conceived as the joyful, forgiving, kindhearted father figure he is today; rather, he was a powerful and vengeful deity who condemns sinners to the fire.

Another doorway was more Romanesque. Above its rounded arch floral motifs abounded. The door is flanked by two soldiers, their bodies covered in what look like fish scales, wielding shields and clubs. Statues of lions were seated on platforms to the right and left. Above the door, the window was divided into pretty swirling patterns. In a third doorway, also Romanesque, smiling demons seem to pop out of the stone, along with two curious cows heads. The Romanesque seems to have been more playful than the Gothic.

We walked inside. I was trying my best to be alert and focused, but the wine was having its effect. I kept zoning out as I walked around the cathedral, and didn’t get the proper experience. Still, I remember being very impressed by the carvings in high-relief behind the main altar. They represented scenes of intense drama. I remember one in particular that depicted what appear to be Roman soldiers massacring women and children. Their swords are drawn, and several are stabbing or slashing down at women on the ground, whose hands are uselessly raised in defense, their faces contorted in terror. It’s a gruesome scene; and the craftsmanship is superb.

The rest is a blur, however, and the next thing I knew I was being whisked off to the Basílica de San Vicente. This basilica is one of the best examples of Romanesque architecture in the country. According to legend, it was built on the site where three young siblings were martyred during Roman times.

More bizarre figures stand on the capitols of the columns flanking the door—sphinxes this time; and more floral, swirling designs filled the stone. On the inside, right before the altar, is a massive, elaborate cenotaph to the three martyrs, covered in painted carvings that narrate their lives from beginning to end. I was deeply impressed. But this is the only thing that stuck in my befuddled mind, and soon we had to go.

In fact, we had run out of time. We’d spent so long at the restaurant stuffing ourselves that we gave ourselves only a few hours before our train back to Madrid. So, with much reluctance, we pulled ourselves away, passed again under the main gate of the city, and headed towards the station.

We trekked up a hill and got on the train with only a couple minutes to spare. I planned to read, but fell into a deep doze as soon as I sat down. And so my drunken body was conveyed to Madrid.

Addendum: In a later trip to Ávila, I managed to investigate some sites that I missed on my first pass through.

One of the most iconic sites of Ávila are Los Cuatro Postes, the Four Posts. This is a humilladero, or a religious sign marking the entrance to a city. The marker itself is extremely simple: just a cross standing within four posts. But the view from of the city from this spot is excellent (see the photo above). Multiple tourist buses were parked nearby, so their passengers could get out and snap a picture. 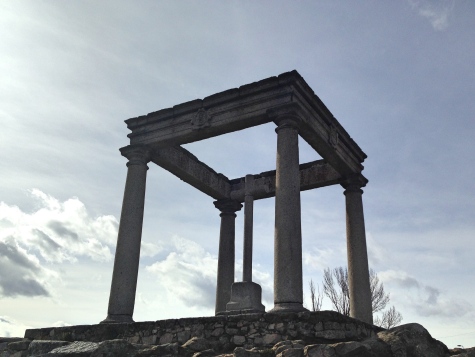 As I walked back to the city, crossing the bridge you can see in the foreground above, I found a nice walking path that runs along the river Adaja. There is also a lovely path that goes alongside the walls on the other side of the city, giving you an unimpeded view of the country beyond.

Situated outside the city walls is the Real Monasterio de Santo Tomás, a gothic monastery that was founded under the reign of the Catholic Monarchs. The monastery is home to several excellent cloisters and an impressive church. Somewhat more strangely, the monastery also contains two miniature museums, one of natural history and one of Asian art. The natural history “museum” is especially odd, since it consists of little more than the stuffed and preserved carcasses of several animals, sitting behind class cases in a few little rooms. I assume that this taxidermy was performed a long time ago, when the clergy was still the leading intellectual force in the country. The museum of Asian art is, by contrast, quite nice, containing excellent samples of sculpture from many different countries.

Ávila is certainly one of the most romantic cities in Spain, and easily one of the best day trips from Madrid. Just don’t eat or drink too much.