The bus crawled out of Zaragoza’s main bus terminal, Delicias, and quickly left the city limits. It was early morning. The landscape was entirely shrouded in fog. It wasn’t long before I gave up trying to see the countryside and fell asleep. When I awoke—with a headache and a nasty taste in my mouth—we had parked in Catalayud, a small town midway between Zaragoza and my destination, where we had to transfer buses. I was on my way to the Monasterio de Piedra.

I was still in a daze. That morning I had awoken at an ungodly hour to walk all the way across the misty city to catch an eight o’clock bus. I still felt chilled from the early morning air, but I couldn’t warm up, since it was nearly as cold inside the bus station as it was outside.

I looked out the station window to check if there was anything to see, but the fog acted as an impenetrable veil. This was a shame, since I had noticed Calatayud from the highway on the drive to Zaragoza, and immediately became intrigued. The town is nestled beneath towering cliffs, on top of which stands a commanding castle, whose walls look like they sprung spontaneously out of the rocks. This, it turns out, is the oldest and largest Moorish fortress still existent in Spain.

It wasn’t long before we boarded another bus. Again, I fell asleep immediately, only coming to my senses as we approached the monastery. The fog had cleared by now, and I could see that our bus was creeping along a fairly narrow road, situated above a river; red cliffs ran along the other side. This dramatic scenery was an omen of what was to come.

Finally we arrived. We all shuffled out of the bus and made our way past the walls and into the complex. I waited in line and bought a ticket, still fairly ignorant of what I was paying for. I had come here on the recommendation of friends; and as usual I hadn’t looked up any information about the place before coming.

The Monasterio de Piedra is situated at the confluence of the rivers Piedra (thus the name) and Ortiz, in a remote spot within the Iberian Mountains. Founded in the late 12th century by the Cistercians, the monastery was a symbol and outpost of the accelerating Reconquista, the Christian push southward against the Moors, who then controlled all of Aragon and beyond. As such, the monastery was liable to being attacked, which is why defensive wall surrounds the complex.

During the centuries of its use, as the Cistercian monks worked and prayed along the banks of the Piedra, steeped in the cool mountain air of the region. The Moors, who had so long controlled and shaped the Iberian Peninsula—it was the Moors, for example, who established the city of Catalayud that I passed through—eventually lost control, and the small Christian principalities and kingdoms were merged into larger and larger states. It wasn’t long after the “reconquest” was completed, and Castile and Aragon were unified under the “Catholic Monarchs,” that Columbus made his famous voyage to the “Indies,” thus commencing Spain’s brutal colonization of the New World. It was here, in this monastery, that chocolate was first made in Europe, after Hernán Cortes send cacao beans and an Aztec recipe to the monks here.

Three hundred years later, Spain was again divided. In 1833, the first Carlist war commenced, a war between two contending successors to the throne, Carlos de Borbón and Isabella II (who won, and was eventually deposed). Heavily in debt from the prolonged civil war, the Spanish government commenced another of its desamortizaciones, or confiscations, of Church property. Besides the financial incentive, the conservative Church hierarchy supported the reactionary Don Carlos, so this move had both financial and emotional appeal. In any case, it was during this desamortización that the Monasterio de Piedra was seized and sold, thus putting an end to its Catholic history.

For reason of pure anti-clerical fervor, I presume, the church building itself was burned. Now all that remains is a ruined shell of a building. This is a shame, since was fragments that remains give some hint of a glorious medieval edifice. Some of the ornamental friezes around the doorways, for example, are of the finest quality. Now, however, the building’s appeal is Romantic rather than Romanesque. As I’ve mentioned elsewhere, ruins have a strange power to evoke feelings of mysterious awe. Certainly I felt this as I sat facing the destroyed altar, the walls reaching up to a vacant ceiling, the sky gaping overhead. It was like stepping into one of Caspar David Friedrich’s paintings—a timeless, fossilized wreck. 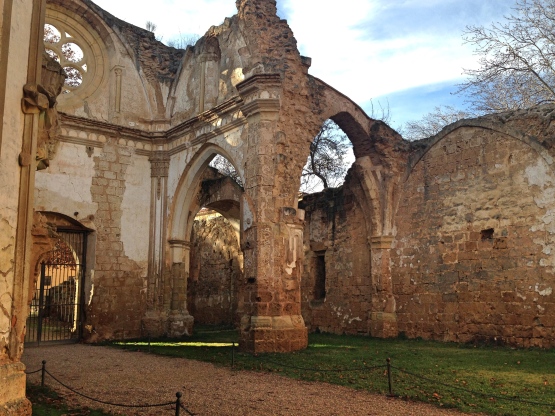 If the burnt church building is unintentionally romantic, the rest of the monastery is quite intentionally so. After briefly being owned by a wealthy Catalan merchant, who mainly used it for agriculture, it passed into the hands of Juan Federico Muntadas.

A well-educated and original man—among other things, he created the first fish farm in Spain—Muntadas was born in 1826, and was thus roughly of the same generation as Gustavo Adolfo Bécquer. And, like Bécquer, he was a Romantic. If you, for example, compare the royal gardens of Aranjuez or La Granja with Muntadas’s creation in the Monasterio de Piedra, you can get some idea of the mental difference between the Enlightenment and the Romantics. Whereas the royal gardens are neat, orderly, symmetrical, with clearly delineated plots for plants and paths for people, Muntadas molded a space that creates the sensation—if not exactly the illusion—of untrammeled nature. 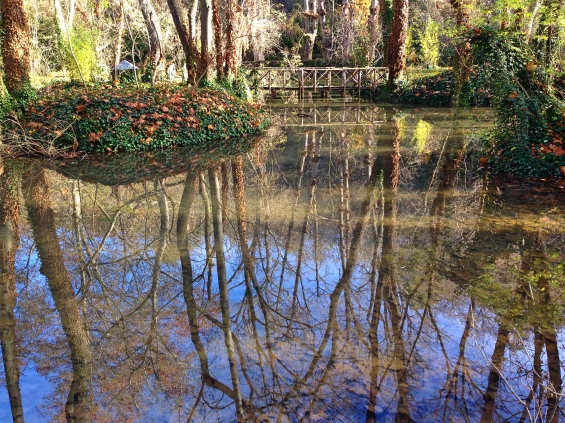 The walking path through the monastery grounds takes about an hour. Though it was winter, the place was still quite green. Shallow ponds reflected the twisted and bare forms of tree limbs, while the verdant underbrush was speckled with the reds of crinkled fallen leaves. Small wooden bridges led the walker through this marshy area to the main attraction: the waterfalls.

Using the diverted waters of the Piedra and the Ortiz, Muntadas created a dazzling series of cascades. Varying in size from ankle-level to the size of an apartment building, these waterfalls are some of the prettiest I have ever seen. The rocks have been carefully placed to divide the stream into several rivulets, creating a dancing pattern of sparkling, splashing streams. 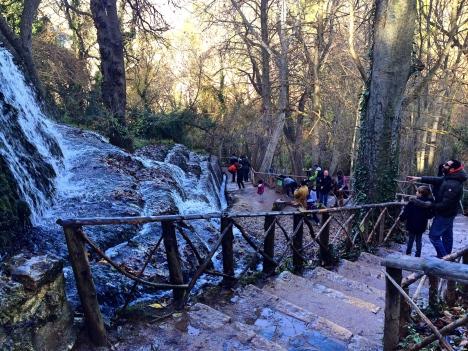 The path took me up beside one of the larger waterfalls and up a staircase in the adjacent rock face. Ivy, branches, and leaves were draped around the water, as if thirsty for a drink. Once at the top, we passed over a shallow stream, and followed it down again as it accelerated into a whooshing, multi-layered cataract, the stairwell winding its way downwards beside the water. Children and parents were crowded on the slippery steps, posing for photos. Along the way I caught a glimpse of the surrounding area, whose red rocky cliffs and rolling hills stretched into the far distance. The path continued, becoming narrow as it navigated the hillside, until finally we were led into a cave.

This cave—full of stalactites and stalagmites, green with algae, the jagged rock edges worn into eerie undulations by the water—was under the largest of the waterfalls. Water poured down at its entrance, filling the place with a ceaseless mist. I had to take off my glasses since they got so covered in droplets. We came out of the cave the same way we went in; then, after a walk through a long tunnel, I found myself by the famous Lago del Espejo, or Mirror Lake. 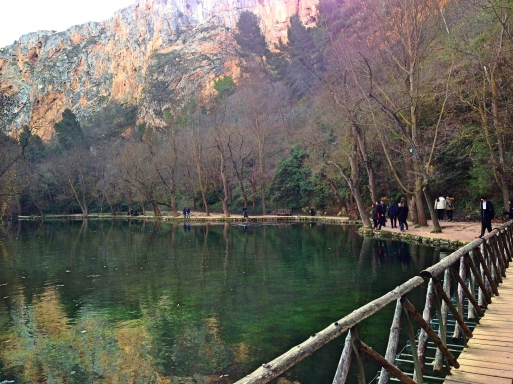 The shallow water, only inches deep and filled with aquatic plants, was uncannily reflective. And there was plenty to reflect, since the lake is situated underneath impressive rock faces, stretching up far above us and casting imposing shadows. By this time I had completely fallen under the spell of the place. The impression created by so many manipulations of water and stone was that of deep, almost meditative calm. I felt perfectly relaxed and refreshed. 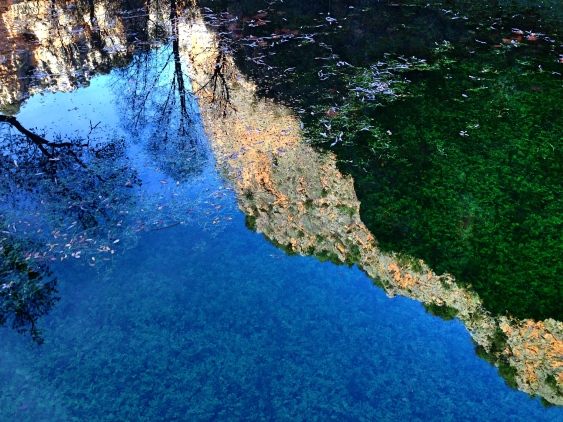 Finally I ended up where I had begun: by the old, burnt church. Quite hungry by now, I went to the restaurant near the visitor’s center, which had quite a good—and affordable—daily menu. Then, stuffed and exhausted, I boarded the bus to go back to Zaragoza.

Remote and difficult to get to using public transportation, El Monasterio de Piedra is yet another example of Spain’s seemingly inexhaustible treasures.