(Continued from my posts about Jerez de la Frontera, Cádiz, Nerja, and Ronda.)

The day started with another problem. We had flights booked back to Madrid, but both of us had forgotten to bring our passports. Before seeing anything in Málaga, therefore, we had to take a trip to the airport (luckily, easily accessible on the metro) to find out whether we could fly using our Spanish ID cards. Long story short, we couldn’t, and it was too late to get a refund. Travel can be a humbling experience.

It was a shame to waste time like that, since this was our only day in Málaga.

Málaga is the second-largest city in Andalusia, after Seville, and the sixth-largest in Spain. Like Cádiz, the city’s origins lay far in the past, founded by Phoenicians thousands of years ago, making it among the oldest cities in the world. Carthaginians, Romans, and Muslims Berbers have all ruled the city in turn. Nowadays the place is bustling—with a busy port and a thriving economy. Yet like everywhere on the Costa del Sol, the core of the city is tourism.

Today was a good day for tourism. It was December 30th and the weather was perfect.

After arriving back to the center we ate quickly in a kebab place, and soon were headed to our first stop: the Alcazaba. This is an old citadel in the center of the city; and as its name suggests, it was built by the Moors. The city of Málaga, by the way, was among the last to fall to the Reconquista, being taken by the Catholic Monarchs in 1487 after a long siege, just five years before Granada, the last Moorish stronghold, fell.

The fortress stands on a hill overlooking the surrounding streets—a collection of tan walls and towers. Below the fortress are the remains of an old Roman theater; and the fortress itself is built over a previous Roman fortification. Thus the layers of history accumulate.

We paid the small fee and went inside. Most of the walking was uphill (which didn’t make the döner kebab in my stomach sit any easier). The place was attractive for its gardens and its promenades rather than its architecture. It was a fortress and not a castle, after all, and so free of ornamentation.

We spent a pleasant hour wandering around its walls and gardens, enjoying the ubiquitous Andalusian fountains and streams that flowed all over the place. These tiny aqueducts, carrying water down stairwells, across walkways, and into fountains, might be the most distinctive sign of Andalusia. These are a sign of Andalusia’s Moorish legacy: it was the Muslims who introduced irrigation into the region, which forever transformed the landscape and permitted the growth of new crops. Practical considerations aside, water has a special symbolic significance in Islam—a religion which grew up in a region even drier than Andalusia. Running water gives everything a touch of paradise, especially in a climate this hot and dry. 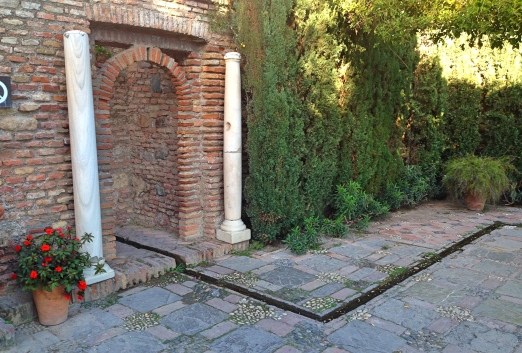 Below the Alcazaba is the aforementioned Roman theater. You can walk inside and sit on the top steps for free. By now, with my stomach in open rebellion from the greasy food, it felt magnificent just to sit down for a few minutes. Immediately below us were the ruins of where the stage had been. On the street beyond, a performer was playing John Mayer on guitar.

John Mayer thus collided with Ancient Rome in my mind, making me feel even more queasy. This odd juxtaposition of ancient and new, elegant and tacky, timeless and transitory, is what characterizes all trips to historical places. Just when you are getting lost in reveries of the ancient past, the constant crush of tourists with selfie-sticks and the peddlers with their overpriced baubles insistently shock one back to the present day.

Daylight was already waning, but there was something more I wanted to see: the Castillo de Gilbralfaro. It was in this castle that, in 1487, the Moors held out in a famous three-month siege against the Catholic Monarchs. The castle stands on the same hill as the Alcazaba, but much higher up. This hill, by the way, has the same name as the castle, Gilbralfaro, and is one of the foothills of the Málaga Mountains.

To get up to the castle, we had to go up a steep walking path that zig-zagged its way to the top. We took half an hour to get there, with fairly frequent stops for two unathletic Americans to catch their breath. The views kept getting better, though, so we pressed on, until finally we reached the entrance and walked in.

As the guard informed us, we only had half an hour before the placed closed. We didn’t waste any time. At the first entrance to the castle walls, we climbed up and began walking. The view from up here was incredible. (In clear weather it is possible to see all the way to the Strait of Gibraltar and the Rif mountains in Morroco.) We could see for miles and miles—the harbor, the city, and the mountain range to the north. The castle walls went all around the perimeter, allowing us a 360 degree view.

After walking across one wall, entering a tower, and climbing some stairs, I found myself standing on the highest point of the fortification, absolutely alone. The whole city stretched out before me. I could see the ships at dock and the massive cranes used to load and unload them; two large freighters were sitting in the water offshore; thousands of white apartment and office buildings spread across the hilly terrain; and green mountains curved into the horizon. From up here, everything looked so precious and so delicate. The town, in particular, looked like a bunch of toys scattered across the landscape.

Night was falling. To our right, as we faced the Mediterranean, the setting sun turned the sky a vivid orange. We descended slowly down the hill, by now completely cured of the stress of the morning, once more under the enchanting aura of Andalusia. The weather was perfect, the sky was cloudless, and everybody around was laughing. And in this state of reverie, we headed for the beach.

By the time we arrived, the sun had sank completely below the horizon, leaving the world in twilight. We walked alongside the water, listening to the soft sound of the waves. It was dark and a bit chilly now, and only a few people were on the beach. We reached boardwalk, walked to the end, and sat down.

The last light was just leaving the horizon, painting the western sky purple and the skyline red. The shore, the city, and the harbor were outlined against the sky. The skeletal silhouettes of cranes hung over the water. A lighthouse began flashing its warning. The wind whipped up, chilling us through our light clothes and sending waves splashing.

It was time to eat dinner and go to sleep. We went back towards town. Dozens and dozens of shacks lined the road, selling fireworks, dolls, toys, knickknacks, incense, candy, and nativity figurines. It was a Christmas market. In Spain, you see, gifts are normally given on Epiphany, or Three Kings Day (in Spanish called Tres Reyes Magos), which falls on January 6. Thus Christmas season extends a lot further than December 25 here.

The sidewalk was crowded with Spaniards; kids were all over the place, some sparring with toy swords, some slumped in sleep in strollers. We reached the main avenue and turned towards town. A long arch of Christmas lights extended over the packed sidewalk.—the famous Malagueño Christmas lights. Suns and moons and stars studded the glowing canopy, which extended hundreds of feet down the avenue. More than anything I saw that vacation, this walkway, crowded with happy people, awoke in me that wonderful Christmas feeling—the feeling of naïve wonder and excitement, the magic feeling of childhood when the world was simple and good and everything was new.

Our trip had come to a close. We were taking a Blablacar back the next day. To celebrate, we ate at El Pimpi, a restaurant and winery that was recommended to us. The service was astonishingly attentive for a Spanish restaurant, the food was excellent, and I drank several pintados (which the waiter explained was half sweet wine and half dry sherry).

In the morning we woke up early, said goodbye to our hosts, and walked to the train station, Vialia, to meet our driver. Five hours later we stepped out of the car into the cold Madrid air. It was New Year’s Eve. That night we celebrated with some friends of ours. As is the custom in Spain, we ate twelve grapes as the clock ticked down towards New Year’s, making a wish for each grape. Everyone was celebrating, the world was reborn, and the future was bright.

7 thoughts on “Christmastime in Andalusia: Málaga”