Our next Airbnb was in Málaga. The Blablacar driver for our ride was a nice fellow from Cádiz. His accent, however, was absolutely incomprehensible to us. He spoke like a jackhammer, and made about as much sense. I have heard from people here in Madrid (who are obviously biased) that the people of Cádiz have the worst accents in all of Spain; even native Spaniards have trouble understanding it. He might as well have been speaking another language.

At least we could understand the radio, however, since it was in English. Málaga, you see, has become something of a getaway home for retired English people—England’s Florida, you might say. This expatriate community has created its own little England in the province. Radio stations, advertisements, store names—English is all over the place. You can even find bars that serve fish and chips and warm beer.

(Subsequent experience only confirms this. I came back to the Málaga a year later to stay with a relative in the outskirts of the city. One day, while walking around the neighborhood of my cousin’s rented house, I noticed that all of the “Beware of Dog!” signs on the houses were either in English or in German (Vorsicht vor dem Hund!), but none were in Spanish.)

And this is not to mention the huge numbers of tourists who come here, usually from colder climes, to enjoy the famous Costa del Sol—the series of beach towns on the south of the Peninsula, perpetually sunny and beautiful. We had come to see one of these beach downs: Nerja.

Nerja is about 50 km east of Málaga. The bus leaves from Vialia, the central transportation hub in the city for both buses and trains, and the ride takes about an hour. We arrived not knowing what to expect. The only reason we went was because a friend had recommended going.

Thus we were surprised, after walking from the bus stop through town, to find ourselves standing in a plaza filled with restaurants and people, which sat on a big rock overlooking the sea. This is the famed Balcón de Europea. The view was incredible. In front was the Mediterranean, a bright aquamarine; and flanking the plaza, far below us, were small beaches. Foamy waves washed the sand where kids were playing in the water. Over these beaches, white houses and hotels clung to the cliffs, every window open to the ocean breeze. It could not have looked more like a tropical paradise.

We climbed down some stairs from the plaza to the white beach, which was hemmed in by rock formations on either side. Whole families were sunning themselves on the sand; brightly colored canoes were sitting near a little hut; and a father was playing with his daughters in the gentle waves. I can see why so many tourists come here. 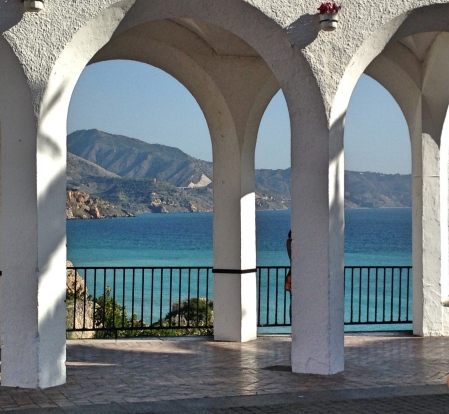 After we got our fill of sun and sand we climbed the stairs again and ate. We had only one thing we particularly wanted to see in Nerja: the caves.

The Caves of Nerja were discovered as recently as 1959, accidentally stumbled upon by five friends. Since then they have become a major tourist attraction. Unfortunately for us, the caves aren’t in the town center; they’re about an hour away by foot.

A lot of this journey was, unsurprisingly, pretty dull; though there were some neat things to see along the way. We passed restaurants, houses, farmlands, bridges, with the Mediterranean constantly on our right. Eventually we came to the Aqueduct of Nerja, which looks like a Roman Aqueduct, more or less, but was actually built in the 1800s for the industrial revolution. It’s a fine piece of architecture, with four rows of arches built of red brick; and it’s still in use. 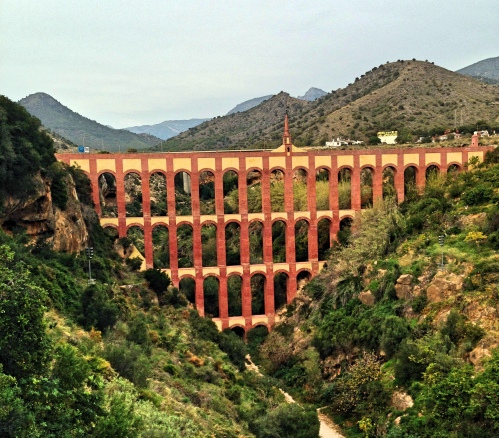 We arrived at the caves, both of us quite tired, paid the entrance fee, and descended into the bowels of the earth. These caves, which began to form about five million years ago, were in continuous use by humans from the Ice Age until a few thousand years ago. Paintings have been discovered on the cave, though you can’t visit them, and in 2012 it was announced that some paintings were possibly made by Neanderthals—which would make them unique.

After walking through a series of small chambers, we walked into one of the big ones.

It was stunning. I had no idea these caves were so huge. Standing at the bottom of one of the big chambers was like standing in a basilica looking up at the roof. Years of seeping water and liquid erosion has left the cave full of stalactites and stalagmites; every surface looks melted, as if the rock of the cave were chocolate left out too long in the sun. How many years of water drip, drip, dripping must it have taken for these bubbling, flowing textures to have arisen in solid stone? You can’t wrap your mind around it. 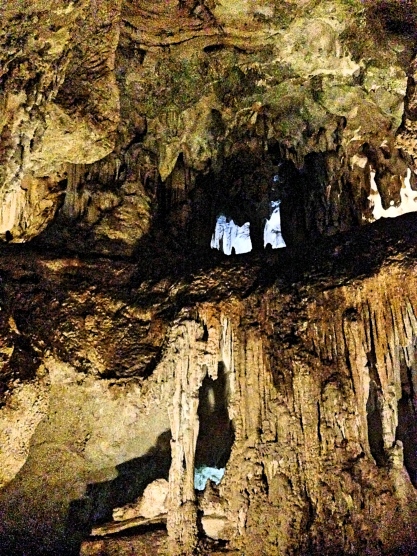 And the caves kept going, every chamber more impressive than the next. In the last and biggest there was a tremendous pillar, extending from the floor to the ceiling like a column in a cathedral. Indeed, the elaborate patterns in the rock reminded me very much of gothic ornamentation. And is it a coincidence that our most sacred spaces reproduce dark, stony, shadowy interiors such as this?

Think of the early humans, thousands of years ago, who took refuge in these natural shelters seeking protection from predators and the elements. What were their thoughts as they sat here in the darkness? What did they talk about? How did they pass the idle hours? Did this place, so grand and so inhumanly vast—a place of safety but also of mystery—excite the first religious stirrings in our ancestors? Standing in that cave, it must have seemed obvious that there were forces far more powerful than humans and animals shaping the earth.

After an hour, we were blinking in the daylight. Tired and thirsty, we still had the long walk back from the caves to Nerja, to catch the bus back to Málaga. So we bought bottles of water and set out, too tired to talk even if we had anything to say. The clouds closed in, evening fell, and the sun was setting in the distance when we reached the station. Both of us fell asleep almost immediately after we sat down on the bus. We had to rest: we had another trip the next day.

4 thoughts on “Christmastime in Andalusia: Nerja”