In Praise of Brexit

Praise of Folly by Desiderius Erasmus

A Review of The Praise of Folly by Erasmus

About five hundred years ago, a man named Erasmus decided to publish a book praising me. Unbelievably, no one had this idea before, and none since. Nobody has the time or the inclination—nobody besides Erasmus, that is—to sing my praises, apparently. All the other gods get their encomiums, but not me. 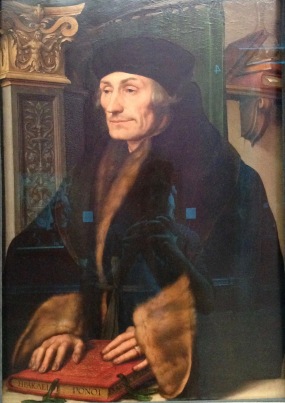 Well, perhaps I should take the neglect as a compliment. After all, isn’t it the height of folly not to acknowledge the role that folly plays in human life? So is not the neglect a kind of compliment, albeit backhanded?

Nevertheless, some folks need some reminding, it seems, especially after what happened the other day. Oh, you know what I’m talking about: the United Kingdom’s vote to leave the European Union. All I’m hearing left and right is how stupid, short-sighted, narrow-minded, and above all foolish it was to vote “leave.” Well, I can’t stand my name being dragged around in the dust any longer, so I’m taking this opportunity to peep up and remind you how much you owe me.

First, let’s follow in Erasmus’s footsteps and take a short trip around Europe. As you might already know, Erasmus may justly be called the first true “European,” since he was such a cosmopolitan fellow and traveled everywhere. Even now, the trans-European student-exchange program is named after Erasmus. You might already know that the most popular destination for the Erasmus program is sunny Spain, where lots of young Britons like to go and get a tan. (Guess they won’t be coming anymore!)

Spain’s a lot different now from when Erasmus was alive. Back then, the Inquisition was in full swing and anybody who wanted to hold public office had to prove his “purity of blood,” which meant he didn’t have any Jewish or Muslims ancestors. Nowadays we don’t see that kind of behavior anymore in Spain; the Spaniards decided that it wasn’t such a good idea. But the folks in England apparently disagree: one UKIP candidate, Robert Blay, got suspended after saying his rival “isn’t British enough.” You see, my foolish devotees never disappear, but only migrate!

Yes indeed, Spain is truly different now. Let’s go to the Mediterranean coast to take a closer look. It’s a veritable mini-England! We can find British pubs, British radio broadcasts, British supermarkets selling British products. We can see retired old Brits eating baked beans and drinking tea as they take in the southern sun. And we can meet some Brits who have lived here for over a decade, and who still can’t speak a word of Spanish! Yes, and in between a pint these same Brits can tell you about how terrible is the EU and how there are too many immigrants in England. Oh, my wonderful followers!

As you might recall, it was around the time Erasmus wrote this book that England decided to leave another international organization: the Catholic Church. And the reasons were, I suppose, similar enough: “We don’t want some Italian Pope telling our king which wife he can or can’t behead!” Thomas More, one of Erasmus’s friends, and to whom this book is dedicated, disagreed with this, and he got beheaded along with the wives. Lots of people didn’t like this, but honestly I can’t say it was such a bad move. Executions are decisive, at least. Some people still agree with this strategy, like the guy who killed the politician Jo Cox. It worked for Henry VIII, so it can work for us!

Let’s fast forward a bit in time, to the glorious British Empire. By Jingo, it was big! It stretched across the whole world! Look at how these colonial officers stroll around Mumbai, Nairobi, Hong Kong, Sydney! You’ve got to admire them. They don’t ask anybody’s permission to go anywhere, they just walk right in with their guns and biscuits. Doesn’t take long to subdue the native population when you’ve got the Royal Navy on your side! Sure, this approach didn’t please everybody. But, hey, it was the high point of British history. Nowadays, they’re a bit more worried about foreign immigrants colonizing them than the reverse.

Now you see what a big role I’ve played throughout history. You see how many decisions and opinions I’ve inspired! Oh, but now I hear some people saying that the world would be better off without me. Sure, Folly is important, they say, but that doesn’t mean Folly is worth praising. Fair enough, I suppose. Yes, maybe I do cause a bit of mayhem in the world. And yes, maybe I take things too far. But consider this: For every bad decision I inspire, I also provide the remedy.

No! Of course not! And since happiness is the goal of life, and happiness is most easily achieved through folly, I think that, despite whatever decision I inspire, I still deserve a lot of praise.