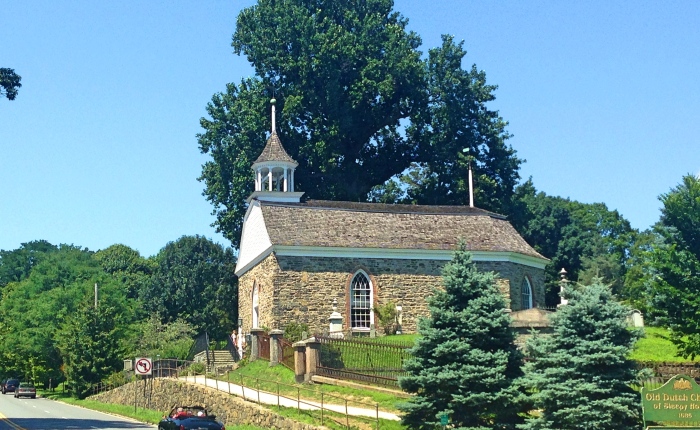 The Legend of Sleepy Hollow and Other Stories: Or, The Sketch Book of Geoffrey Crayon, Gent. by Washington Irving

Prose writers are voluminous and unwieldy; their pages crowded with commonplaces, and their thoughts expanded into tediousness.

I am a child of Sleepy Hollow, New York, and I have lived in Irving’s shadow almost as long as I can remember.

Every Halloween, this town is inundated with tourists, who come to wander around the lovely old cemetery where the legend is set, and where Irving himself is buried. Behind my house is where they put on the “haunted hayride.” I went every year as a kid. A pickup truck drags groups of twenty in a trailer through a stretch of forest, where volunteers dressed in masks jumped out and scared the kids half to death. And of course no hayride was complete without the headless horseman himself, riding out of the shadows on a black horse with a jack-o’-lantern on his knee.

The town nextdoor is called ‘Irvington’ in Washington Irving’s honor, and it is there that his old house, Sunnyside, is situated. The house is a delightful little dwelling, a small jumble of architectural styles—gothic, Dutch, Spanish—overlooking the Hudson River. Irving was an amateur architect and landscaper, very much of the Romantic school, and re-made the old farm he bought into a charming park, with a little pond, a babbling brook, and paths that wind through the forest nearby. On the property is a sycamore tree that has been growing since 1776, seven years before Irving himself was born.

When Irving bought the property, he had unimpeded access to the river; but that changed when, ten years later, the Hudson Line railroad was built at the river’s edge. Nowadays, trains rattle by every ten minutes or so. All the old train cars have names printed on their sides; and as I sat there on a recent visit, I saw that one of the cars on the passing Amtrak was named “Washington Irving.” He is simply everywhere. There is a statue of Rip Van Winkle outside the Irvington Town Hall Theater. On the walk back to my house I passed by the Washington Irving Middle School, which I attended, the Tarrytown High School, where our football team is the Horsemen, and the Christ Episcopal Church, where Irving himself worshiped, and where his pew is still preserved.*

Right outside Philipsburg Manor—an old colonial farm that now serves as a historical site—is an ugly metal sculpture of the Headless Horseman. Right next to it is where the old bridge stood where Ichabod Crane met his fate. There is not much to see now, just a modern concrete construction. But if you keep walking into the Sleepy Hollow Cemetery you can see the Old Dutch Church, and, a little farther on, you will come across the man’s tombstone. Like his house, his grave is neither ostentatious nor grandiose, just a simple stone that lays in a family plot.

The man’s influence is inescapable. It was Washington Irving who originated the nickname ‘Knickerbockers’ (after an imaginary Dutch historian he used as a nom de plume) for the denizens of New York. The New York Knicks owe their name to Irving, and the word ‘knickers’ also derives, through devious channels, to this writer. It was Irving who popularized the myth that Christopher Columbus thought the earth was flat, which he included in a biography of Columbus that Irving wrote while living in Spain. It was Irving, too, who originated the nickname ‘Gotham’ for New York City.

We even owe our holiday celebrations to Irving, since it was he, along with Charles Dickens, who helped to make Christmas into the secular holiday of gift-giving and merry-making that it is today. Irving played a hand in the creation of Santa Claus, too, with a story about St. Nicholas in his first book. With his love of ghost stories, Irving is also one of the architects of Halloween—and thousands still make the pilgrimage to visit his tombstone in that ghoulish time of the year. I cannot even escape his influence in Spain, since it was Irving who helped to spread the exotic, enchanted image of Andalusia, and who thus helped make Spain a tourist destination; and it was also thanks to his book of stories about the Alhambra that people began taking an interest in restoring that old ruin.

Washington Irving was named after George Washington, and was born just a few weeks before the Revolutionary War was officially concluded. He was a new man for a new land. An often-told story—difficult to verify—has it that he was taken by his maid to visit George Washington when he was just six years old; there’s a watercolor drawing, still hanging in Irving’s hold house, of the old general patting the young boy on the head. Whether it happened or not, the story seems symbolic of the role that Irving would play in American literature—exactly analogous to George Washington in politics—as a pioneering leader. For it was Washington Irving who was the first American writer to be respected by his English peers. He showed that these unruly savages overseas could aspire to eloquence too.

This book is often marketed as The Legend of Sleepy Hollow and Other Stories; but its original title is The Sketchbook of Geoffrey Crayon, Gent., and was published under that pseudonym rather than Irving’s own name. The book, often merely called The Sketchbook, is a sort of parody of the sketchbooks that other wealthy American travelers made on their visits to Europe. It is framed as a travel book, and contains many vignettes about places Irving visited. But Irving does not stick to this theme very diligently. The book also contains some short pieces about Native Americans; and the two most famous stories, “The Legend of Sleepy Hollow” and “Rip Van Winkle,” are both set in New York, and purport to be found among the old papers of Diedrich Knickerbocker, another of Irving’s pseudonyms.

Although the collection is miscellaneous, Irving was not a writer of great breadth, and his distinctive style is consistent throughout. Thematically, Irving was a purebred Romantic. He has a taste for quaint customs, forgotten ruins, exotic places, and old yarns—in short, everything antique, out-of-the-way, and foreign, everything that allows his imagination to run wild with conjecture. These preoccupations lead him to investigate old English Christmas customs in the country, and to rail against their disappearance. It also leads him to treat the Native Americans as noble savages, the pure emblems of a disappearing culture, as well as to focus his eye on the old Dutch lore lingering about his native New York.

In truth there is not much substance to his writing. The closest he ever gets to philosophy is the Romantic, Ozymandian sentiment that all things yield to time. Rather, Irving is a stylist. His prose is fluent and easygoing—indeed, remarkably easy to read considering its age—so effortless that the prose practically reads itself. The subject-matter is usually a description of some kind—of what someone is wearing, of a farm or a tavern, of a funeral or a wedding—and he steers clear of all argument and dialogue, maintaining the fluid rhythm of his pen as it flies forward. When he is not describing a gothic ruin, an old curiosity, or a picturesque landscape, he is involved in some ghost story or traveler’s anecdote. Some of these, indeed many, involve love affairs between gallant soldiers and young women who possess “that mysterious but impassive charm of virgin purity in whose hallowed sphere no guilty thought can live”—it’s quite revolting.

But if Irving nowadays strikes one as lightweight and Romantic to the point of silliness, one should remember that he was a pioneer and an innovator—the first American man of letters, and one of the champions of Romanticism when that movement had hardly reached this country. And if he seems more style than substance, one should also remember that Irving wrote to amuse, not to instruct; and it is by that goal that he should be measured. Even now, Irving is a champion amuser; and even if he has some unfashionable tastes, he it still fresh and good-natured after all these years:

If, however, I can by any lucky chance, in these days of evil, rub out one wrinkle from the brow of care or beguile the heavy heart of one moment of sorrow; if I can now and then penetrate through the gathering film of misanthropy, prompt a benevolent view of human nature, and make my reader more in good-humor with his fellow-beings and himself—surely, surely, I shall not then have written entirely in vain.

Surely, surely, he has not.

*I recently went to visit this church. As luck would have it, I was about to knock on the door just as the rector, Susan, was on her way out of the building. When I asked about Irving’s pew, she very kindly gave me a quick tour. The old pew sits in a corner now, set aside to preserve it. The church also has Irving’s bible and prayer book—tattered old things in a glass case—as well as a copy of the 1859 issue of Harper’s Magazine that carried a front-page story about Irving’s funeral. “So many people came in, they were worried the floorboards would break,” Susan said.