If you wish to see a German Altstadt (historic center) that escaped the fire and the bombs of the Second World War, you will need to go to a smaller city than Munich and Nuremberg. For this I took a day trip to Bamberg, a city about 60 kilometers north of Nuremberg, an hour away by train. The city of 75,000 souls is wrapped around the winding river Regnitz. Like Rome the city is built upon seven hills, each one topped with a church. Thus it is a city of sweeping views and picturesque quays by the riverside.

The historic center of Bamberg has been a designated UNESCO World Heritage site since 1993, not only for its excellent preservation, but also for its historical importance. The ecclesiastical architecture and the town’s layout proved influential throughout the rest of Germany (or at least that is what the UNESCO website says); and Bamberg also played an important part in the German Enlightenment, being where the philosopher G.F. Hegel and the writer E.T.A. Hoffman spent many years. For my part, I arrived in Bamberg completely ignorant of its history and I have improved very little since then. I just wanted to take some nice photos.

The most iconic image of Bamberg is the Altes Rathaus, or the old town hall. It is built on a little island in the middle of the river, with part of the structure hanging over the water. A bridge goes through the building and out the other side, connecting the island with both sides of the land, making it look like a man holding hands with two partners. Since it proved too small for the intricate bureaucracy of the current age, the building is no longer used as a town hall, but now houses the Museum of the City of Bamberg. No doubt the town hall erected to replace this one has no charming façade or bright colors, since we have grown out of such quaint customs. 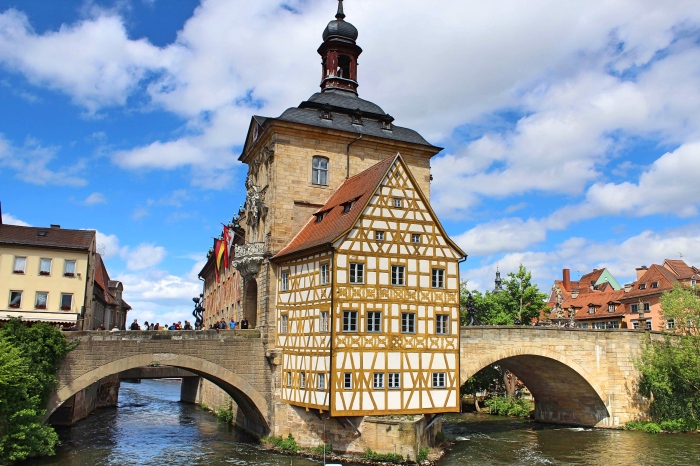 On a nearby bridge you can see Igor Mitoraj’s sculpture, Centurion, an attractive fragment of a sharp Roman visage. From here Bamberg’s “Little Venice” comes into view, a colorful row of fisherman’s houses along the riverside. They don’t have gondolas but they do have ducks. I walked a short circuit along the south side of the river, returning on the north. At this time the coffee from this morning had hit my bladder, which is one of the traveler’s most persistent distractions. Luckily I found a public restroom along the river’s northern edge. Yet like seemingly all the restrooms in Central Europe it cost 50 cents to use, which I think is rather steep for a bodily function—though in fairness, the bathroom was quite clean.

Now it was time to ascend one of Bamberg’s famous hills, for I wanted to see the city’s cathedral. After the Altes Rathaus, this is Bamberg’s most recognizable structure, with the cathedral’s four spires topping a hill like an iron crown. It is a late Romanesque edifice that reminded me somewhat of Toulouse’s Basilica of Saint-Sernin; the cathedral’s massive form lacks that ebullient pointiness of later gothic structures, instead preserving a sort of grand dignity with its symmetrical mass. The cathedral is noteworthy for being one of the few places outside of Italy where a pope is buried—in this case, Pope Clement II (1005-47). A more attractive grave is reserved for Heinrich II, Holy Roman Emperor from 1014 to 1024. The sarcophagi, which shows scenes from the emperor’s life, was carved several hundred years after his death by the German Renaissance sculptor Tilman Riemenschneider. Standing watch nearby is the famous Bamberger Reiter, an equine sculpture portraying a dashing man of uncertain identity.

By now I was hungry, so I walked to some food stands I had seen earlier in the Grüner Markt square. There I indulged in a modern classic of German cuisine, Currywurst: a pork sausage drenched in ketchup spiced with curry. It may sound strange but tastes exactly how you would expect—though for my part the curry flavor is always too mild. In any case, it is filling, sweet, and salty, and does not leave me feeling particularly well. To complete the experience I had a Bavarian Weißbier, which literally means “white beer” but is really wheat beer. It is a rather sweet and light brew, with hardly any bitterness (since few hops are used) or sourness (since more wheat than malt is used). I much prefer them to pilsners. Having topped all this off with another coffee, you can imagine that I was soon paying for the bathrooms once again.

Having got my fill of grease, alcohol, and caffeine, I went off once again to see Bamberg. As I walked aimlessly on, I happened upon a building with a commemorative plaque on the side, which announced that Hegel stayed here while writing his famous Phänomenologie des Geistes, which I had painfully read the year before. I reached out my hand and touched the building with all the reverence due to Teutonic obscurity. From there I went to see the Hoffman house, which has since been converted into a museum about the polymath’s life. I went inside but everything on the walls was written in German, and I did not feel like fighting a battle.

Next I went to the top of another hill, to see the Michaelsberg Abbey. This is no longer an abbey, but a retirement home; but the abbey church is still open—at least, it normally is. When I arrived the building was covered in a thick mass of scaffolding; the church is undergoing substantial repairs and has been closed since 2016. But the abbey is surrounded by attractive gardens; and the patio still offers a wonderful view of Bamberg. On the day I went there were several gliders floating around in the air, their long white wings difficult to see against the clouds. I imagine it would be peaceful to be in one of those, sailing around the sky.

After walking along some more, enjoying the tree-lines streets that wind up and down the hills, examining the charming stone and wood-framed buildings that make the town feel so idyllically rustic, I came upon the Alte Hofhaltung and the Neue Residenz. The former is a lovely building with a steep roof and timber balconies that acted as a sort of palace for the bishops until the seventeenth century, when they moved to the Neue Residenz, a bigger, grander, but somewhat lifeless neoclassical structure nearby. Drunk with the scenery, I continued walking up the hill away from the river, until I came upon the Jacobskirche. This church, dedicated to St. James, was located outside of the now-demolished city walls, and acted as an important stop on the Camino de Santiago, the famous pilgrimage that terminates in Spain. I was surprised and delighted to see signs of the Camino in a distant land, and I enjoyed the peacefulness of the church’s Romanesque interior. 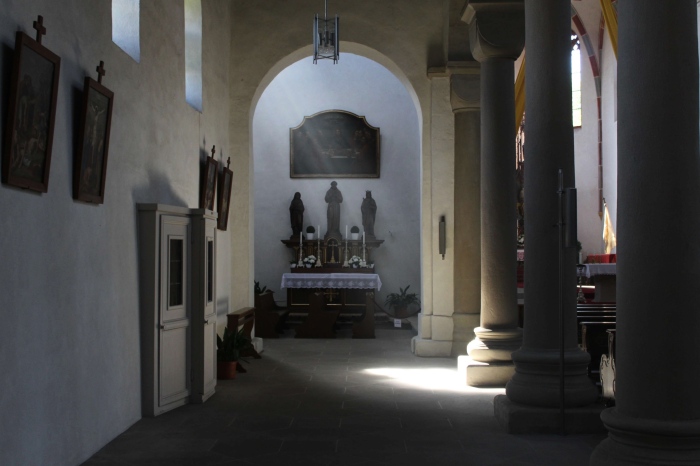 From there it isn’t far to leave the city altogether, entering some of the lush forests that surround Bamberg. On my offline map—I was using the application maps.me to get around—I found a lookout point in a grassy field. Though much of the city center was hidden from view, I could see the whole surrounding valley, with wind turbines on a distant hillside, and the town’s industrial sector off to my left, with freight trains rumbling by. Bavaria is an astonishingly lovely place—at least in summer. The town is surrounded by an extensive system of trails, something which the residents themselves—the Germans are an outdoorsy people—amply take advantage of.

Now the hour of my return train to Nuremberg was approaching. So I walked back into town and back towards the train station. On my way I stopped at the Obere Pfarrekirche, or Upper Parish Church, also called the Church of Our Lady. This is the only purely gothic church in the city; and its altar and ceiling frescos are lovely to behold. Sadly, I missed the opportunity to visit one of Bamberg’s many breweries. In the finest Bavarian tradition, the city has its own local brews and is spotted with beer cellars. Truly, Bamberg is a garden of delights, bucolic and picturesque, and I wish I could have spent more time there. 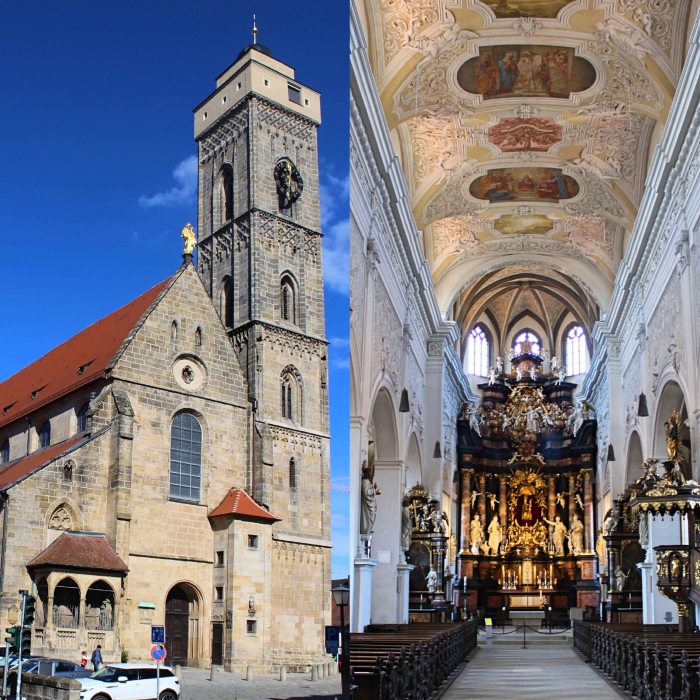