Basking in the Basque Country: the Vizcaya Bridge

(This post is part of my series on the Basque Country. Click here for Bilbao, here for San Juan de Gaztelugatxe, and here for San Sebastián.)

The train pulled up to Portugalete station, the doors opened, and we got off. Portugalete is one of the towns, ranged along the Bilbao river, that make up the Bilbao metropolitan area. (The name’s resemblance with “Portugal” is apparently only a coincidence.) With a population of about 50,000, and a land area of only 3.21 square kilometers, it is actually the fifth most densely populated area in Spain.

To me, the place struck me as a pleasant, moderately urbanized, more or less tranquil town. Along the riverside there were some large, attractive restaurants, their tables crowding into the streets—though at this hour, too early for dinner in Spain, the chairs were mostly empty. But the surroundings didn’t attract my attention for long, since I could already see my goal: the Vizcaya Bridge. 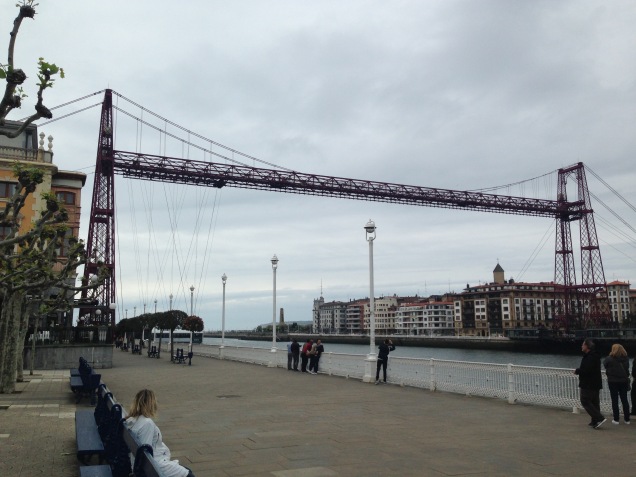 In Spanish it is called the Puente Colgante, or “Hanging Bridge.” The name is appropriate. It is a perplexing sight at first. The bridge has the familiar form of a suspension bridge; but the middle section seems to be misplaced: it hangs ludicrously high in the air, with no ramps to get up or down. The more I looked, the more confused I became, for there didn’t seem to be any way you could use the bridge.

As I got nearer, I noticed something strange on the water. It wasn’t quite on the water, actually, but hovering above it. I looked up, and saw that the thing was hanging from the bridge. So that’s how it worked! The reason the bridge looked so odd was that it transported a shuttle that hung underneath, almost like a puppet on strings. That’s why the bridge was so high up and there weren’t any ramps to get on.

But it looked dangerous to me. The shuttle was fairly large; it transported about six cars and one hundred people. Could that skeletal iron structure above support so much weight? Dreadful fantasies immediately started rushing to my mind. I saw the bridge snapping in the middle, sending iron raining down into the river below, crushing the shuttle and sending everyone inside to a watery grave. Unfortunately, awful visions like this plague me rather frequently. I wonder if it’s the product of a morbid imagination, or just watching too many action movies.

We went into the office and bought our tickets, though I wasn’t sure what the tickets were for. The man explained that there was an elevator to take you up to the top, where you could walk to the other end. He also gave us a little information pamphlet about the bridge. From this, I learned that the bridge is actually a UNESCO World Heritage site, the only monument in the Industrial Heritage category in Spain.

I also learned more about the construction and history of the bridge. The Vizcaya Bridge is a transporter bridge, the first of its kind in the world. If you haven’t heard of a transporter bridge before, that is perfectly normal, since this type of bridge is uncommon; according to Wiki, less than two dozen were built, and only 12 still stand today.

The Vizcaya Bridge, finished in 1893, was designed by one of Gustave Eiffel’s disciples, Alberto Palacio; and Eiffel’s influence shows. The bridge is built in the same manner as the Eiffel Tower, with narrow iron beams riveted together to form a triangular grid; and like the Eiffel Tower, the Vizcaya Bridge is austere and elegant. Palacio originated the idea in response to a common engineering problem: how do you create a bridge that allows people and cars to cross the river, while leaving the river open for shipping vessels? The Vizcaya bridge, then, in both purpose and execution, is a symbol of the Basque Country’s embrace of industry, commerce, and the future—not to mention art.

(I do wonder, though, whether Palacio’s solution was all that efficient. After all, there must be a reason why the design didn’t catch on. The primary problem, it seems to me, is that the amount of cars and people that can cross at any one time is limited by the size of the shuttle and the frequency of its trips. Perhaps the famous Tower Bridge in London—completed almost the same year—solved the problem more satisfactorily, by putting a drawbridge on the lower level and a pedestrian walkway on the upper. But Palacio’s design is beautiful, original, and elegant, so efficiency can go to the devil.)

Finally it was our turn for the elevator. It was an ancient thing, crawling up the bridge at a snail’s pace. Eventually the lift creaked to a halt, and we got out. A narrow wooden walkway, surrounded by the iron structure, extended from one end of the bridge to the other. It’s really amazing how much of the Vizcaya Bridge is just air. You can see right through the thing, and yet it is strong enough to support the weight of a large shuttle carrying six cars.

I experienced this when one of the shuttles came rolling by, right underneath our feet. I could feel the entire bridge shaking, rattling, and shivering, as the electrical buzzing of the engine roared past. Once again, terrible fantasies started flickering through my mind, this time with me myself plunging to a ghastly death. But soon the shuttle came to a halt, and I realized that the bridge was solid as stone. What an impressive achievement: The bridge seems to float high up in the air, supported by the slenderest structure; and yet it is sturdy enough to remain operational after more than one hundred years of daily use.

We took some time to admire the view. On one side we could see the bay, and then the ocean beyond. In the dockyard in the distance, I could see dozens of giant cranes standing silently, like petrified dinosaurs, waiting to come back to life. On the other side, we could see the river gradually making its way towards Bilbao; and in the distance, a factory loomed. Really, wherever you turned you could not fail to notice the signs of industry, filling up the entire estuary with their jagged, colossal, metallic forms. Below us, we could see the towns of Portugalete on one side and Getxo on the other, their streets now full. We might have stayed more time up there, but the wind was quite strong and chilly, so we took the elevator down on the other side. Not long after that, we took the shuttle from Getxo across the river, back to Portugalete; and I am happy to report that the ride was quick and smooth.

There is only one thing more I have to report. Before we left, GF had asked some of her students in Madrid where you can buy good pizza, and they told her to go to Telepizza (a popular chain here, comparable to Dominoes). That sounded awful to me, but GF wanted to try it; so, once we got to Portugalete, we decided to go to the nearest Telepizza for dinner. It brings me no joy to tell you that, as I expected, the pizza was horrible, some of the worst pizza I’ve ever had; and GF was of the same opinion. Is this what Spanish people think pizza is supposed to taste like?

4 thoughts on “Basking in the Basque Country: the Vizcaya Bridge”