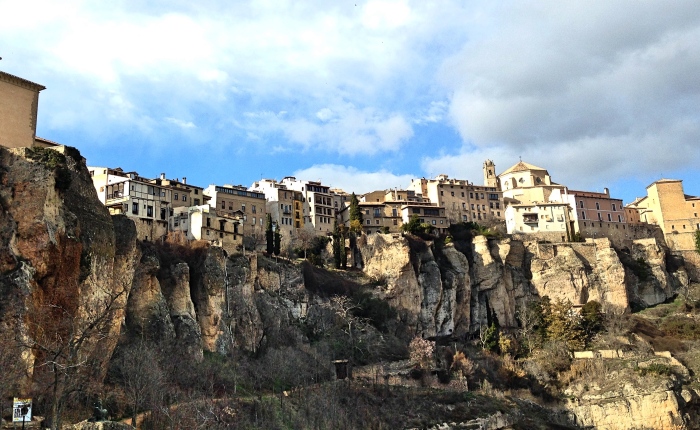 “Is this the right spot?” GF said.

We were standing by a bike rack outside a metro station, waiting for our Blablacar driver to pick us up. He was late.

We were going to Cuenca for a day trip. Cuenca is a small city east of Madrid, about halfway on the road to Valencia. The Spanish word cuenca literally means “basin,” a fitting name for a town known for its gorges. Several of my students had recommended it, so on a weekend when we didn’t have anything else to do we impulsively booked a Blablacar to go there, without even bothering to look for a way back. The drive takes between 1.5 to 2 hours. For those looking to travel with greater comfort and speed, there is a high-speed train that runs to Cuenca several times daily.

Soon the driver arrived with his girlfriend in tow, and we started off towards Cuenca. They were studying tourism and spoke English very well. GF and I did our best to keep the conversation in Spanish, but in general a group will always take the path of least resistance and speak the language easiest for everybody. (This was two years ago, when my Spanish was still quite basic.)

As we neared Cuenca, the driver said:

“Before going to the city we’re going to see the torcas. Want to come?”

“What are torcas?” I asked.

“They’re like big holes in the ground. You’ll see.”

We passed fields and farms and then headed up into some hills into a pine forest. We kept going until we reached a parking lot and then got out. A path led into the forest and further up the hill.

The first torca came into view. The driver was correct: they are big holes in the ground. They were formed by ancient lakes, I believe, but are now completely dry. The biggest ones are over 500 meters, or 1,600 feet, in diameter. These torcas are just one of the natural points of interest in the vicinity of Cuenca. The most famous is the Ciudad Encantada, a geological park filled with weird rocks formed by the limestone deposits of an ancient sea. It is a thirty-minute drive from the city itself and the pictures look marvelous. But there is an entry fee (5€), which made my driver not wish to visit.

We got back in the car and started driving to the Ventano del Diablo, a popular lookout point about 20 minutes outside the city. By now I was getting kind of sick of sitting in the car. We had spent about 2 hours driving so far and I have long legs and achy knees so sitting in cars is very uncomfortable for me. But the view was well worth it.

The lookout point is inside a hollowed out cliff. Standing there, buffeted by the wind, one sees the tan-colored precipices on all sides and the Júcar river whose greenish water flows down below. This is the same river that runs through the city of Cuenca itself, and is responsible for wearing away the deep gorges for which the city is famous. It was also this river which, in 1982, flooded and overran the Tous Dam, damaging several towns and killing 30 people. The flood was so bad that it was even given its own name, the Pantanada de Tous, or the “Marshing of Tous.”

We enjoyed the view until the wind forced us to retreat. In fifteen minutes we’d arrived, parked, and split up. Our driver had kindly agreed to give us a ride back to Madrid, since we hadn’t arranged anything else.

On our walk up to the city we passed over the Huécar, a much smaller river that bounds the southern edge of Cuenca’s old city. The old city center of is even higher than the rest of the town, perched up on a rocky hill 1,000 meters (3,280 feet) above sea level. This is why Cuenca can get chilly.

We were quite hungry by now and were looking forward to lunch. But we got distracted almost immediately by the view. From almost every side of the town there is an excellent vista of the surrounding area. And because the town is squished onto a hill, with very uneven ground, the streets are charmingly narrow and twisting; and several times we had to climb staircases in the street.

The streets were indeed so twisty that we got confused and ended up overshooting the restaurants and going to the other end of town, where we found a lovely iron bridge. Built in 1902, this is the Bridge of Saint Paul, which replaced an older bridge that was built in the 16th century. The bridge gets its name from the Convent of Saint Paul, built on a hill across a gorge opposite the town itself.

From this bridge we could see the famous Casas Colgadas, or the Hanging Houses of Cuenca. These are buildings that are situated right on the edge of the cliff and which have balconies that hang off, giving them their name. It seems dangerous to me, but I suppose you have to use all the real estate you have when you’re confined to the top of a hill.

We took some pictures, fended off a scam artist, and then went up to Plaza Mayor to find a restaurant. I really wanted to eat inside because I was uncomfortably cold, but the best deals were for restaurants that had seats outside, so I decided to suck it up and sit down in the plaza.

The benefit of eating in the Plaza Mayor was that I got a chance to take a good look at the cathedral’s façade, which is particularly pretty. This façade was actually rebuilt after it was destroyed in 1902 by a lightning strike—the same year, coincidentally, as the Bridge of Saint Paul—so the surface that greets visitors today is neo-gothic, though no less attractive for that. The cathedral itself is, along with the Ávila Cathedral, the oldest gothic building in Spain, though succeeding years have wrought their changes.

We paid the bill at the restaurant and then went inside the cathedral. In one chapel there was a colorful statue of a monk standing over a demon; and in the dim light the demon’s eyes deemed to follow me as I walked past. The experience gave me the willies. I can see how such realistic sculptures, combined with dim and flickering light, could have terrified people of a less skeptical disposition.

After that I walked outside to the courtyard and there discovered that there was a kind of patio with a wonderful view of the countryside beyond. There was an air of ruin about the place, filled with cracked stone and damaged statues. But by now the cold was becoming unbearable. I had spent over an hour eating outside and this cathedral wasn’t any warmer. I wanted to go somewhere with heat.

So I convinced GF to visit the Museum of Spanish Abstract Art. This museum is in one of the Hanging Houses and is one of the most notable attractions in Cuenca, but I was mainly interested in the heat.

This museum was founded in 1966 by the Spanish Filipino artist Fernando Zóbel, displaying works that the artist had previously collected. The museum is free to enter and, most importantly, nice and warm inside. Unfortunately, I derived very little pleasure from the artwork on display. At the time I was fairly ignorant of modern art and normally disliked it. If I visited again I would, perhaps, have different opinion.

After wandering around the museum and staring blankly at blank canvases, we left to explore the city some more. The sun was setting now and it was getting dark quickly. We walked up past the Church of St. Peter towards the Barrio del Castillo, so-called because a castle once occupied this hill. Indeed, ruins of a castle wall can be found there still. One can climb up to the top of one of the old turrets for an excellent view of the city and the surrounding countryside.

From here we could see the whole city center below us, the bridge, the valley, and the landscape beyond. In the distance the sun had just set behind the horizon, turning the skyline a bright red. The lights of the town were coming on, and in just a few minutes everything was twilight and the town was aglow with artificial light. On a large hill nearby, the Cerro de Socorro, there is a large statue of Jesus atop a tall pedestal; and now spotlights had been turned out and it glowed bright yellow against the darkness of the surrounding hill.

It was completely dark now and nothing would be open. So GF and I finally gave up and decided that we could go sit in a café until 9:00, when we would meet up with the driver. Eventually the driver and his girlfriend wandered in and sat down with us. Talk turned to politics and, predictably, they asked us about Donald Trump, with that air of horrified bafflement that all Europeans (and many Americans) contemplate the man.

We got back to Madrid at 11:30—over 14 hours after we left. It was a long day. We all said goodbye, and really I was sad to do so. I have had many excellent experiences with Blablacar, but this stands out as by far the best.