When Panic Attacks: The New, Drug-Free Anxiety Therapy That Can Change Your Life by David D. Burns

I have always been an anxious person. I think I get it from my mother.

One time, we were in the car on our way to the supermarket when, for whatever reason, she asked if I had my license on me. “No,” I said. “Why do I need it? You’re driving.” “But what if we get into an accident?” she replied. At first, this response confused me. Then I realized that she was wondering how people would identify my body if we both died in a crash. “I think they’d figure it out,” I said finally, as scenes of bloody car crashes played in my mental theater.

This anxiety was part of my identity. It shaped how I interacted with strangers, my friends, my family, how I behaved in school, at work, and in my relationships. I thought it was a part of me. Sometimes I would have episodes when my worrying would flare up to the point that I was incapacitated; but for the most part it was manageable. Around last year, however, my panicking got decidedly worse. Terrible fantasies would flood my brain, making my chest tense up, my stomach tie itself into a knot, and adrenaline rush through my body. After another attack again this year, I decided that I didn’t want anxiety to be such a big part of my life anymore, and thus reached for this book.

Burns begins with his general views on anxiety. He doesn’t believe in anxiety disorders. The criteria for diagnosis are, he thinks, vague and arbitrary. There are people who tend to be more anxious than others; but anxiety-proneness falls onto a spectrum and does not map onto two neat categories, normal and pathological. Burns also has a negative opinion of anxiety medications. In his experience, they often don’t work and generally leave the underlying cause untouched. Thus he thinks it’s more effective when people don’t tell themselves that they’re “sick” and don’t treat anxiety like a disease to be cured. Rather, anxiety is a common state and it can be effectively managed through fairly simple techniques.

After explaining his general views, Burns launches into his techniques. These techniques occupy the bulk of the book, and are divided into three categories, Cognitive, Exposure, and Hidden-Emotion.

The Cognitive techniques were the most familiar to me, since this is the same approach used in his book on depression, Feeling Good. As the name implies, these techniques focus on your thoughts and beliefs. Anxiety, in this view, is the result of unrealistically negative thoughts which are traceable to certain deeply held beliefs. Burns calls these beliefs self-defeating, because they equate certain things with happiness, and yet inevitably lead to unhappiness. These self-defeating beliefs may be personal—such as perfectionism or achievement addiction—or interpersonal—such as entitlement or blame. The techniques thus focus on these beliefs and the thoughts they give rise to, with the goal of adopting a more realistic, forgiving, and easygoing attitude towards yourself and others.

Exposure techniques operate on a different principle. Instead of combating your anxiety, you seek it out and embrace it. For people with phobias, this means doing exactly the thing they’re afraid of. For people with traumatic memories, this means revisiting these experiences. For people who are shy, this means socializing. If you run away from what you fear, you only tell yourself that you ought to fear it; but if you confront it, you can find out that there’s nothing to be afraid of.

The Hidden-Emotion technique is based on still another principle. It holds that anxiety results when people sweep negative emotions—like frustration, anger, or hatred—under the rug. This most often results from “niceness”—the fear of upsetting anyone or even admitting to yourself that you’re upset. It is not that the negative feelings are consciously shunned, but that they are not consciously registered at all. Thus the technique consists in examining your life—not your childhood, but right now—and looking for things that bother you that you’ve been ignoring.

By the end of the book, Burns has explained 40 techniques. He includes so many because nobody can be sure which technique will work for which person. His treatment plan consists of trying these techniques one after the other until you find one that’s effective. In his experience, it can be very difficult to predict which one will work in any given case, so he encourages you to experiment.

I can’t summarize each of his techniques here, but I want to include just a couple examples of cognitive techniques.

One technique is thinking in shades of grey—that is, avoid essentialism in your self-talk. This sounds simple enough, but I’ve found that most people tend not to do this. For example, if a guy is trying to quit smoking, but he only lasts three months, he might conclude “I’m a failure.” Yet it would be more realistic for him to say “I was successful for three months, and then I relapsed. Maybe I can be successful for longer next time.” That’s both more accurate and more encouraging.

Also useful is the double-standard technique. If you’re having a problem and beating yourself up, ask yourself how you’d treat a friend who was having this same problem. Often you’ll find that you’re much more compassionate, understanding, and optimistic with your friend. Once you realize that, try talking to yourself the same way. If you do this, you can respect yourself in good times and bad, just like you respect your best friends, rather than beating yourself up for falling short, failing, being rejected, or getting criticized.

You may be thinking that these “techniques” are childishly simple. Indeed they are. And yet I was acting in the very opposite way, and without this book I don’t think I would have changed. Besides, simplicity is a good thing. The techniques don’t require you to believe anything untenable or subscribe to a new philosophy of life. They only require that you do some work with a pencil or paper, or try a new approach in conversation, or get over a fear that’s been holding you back. They allow you to understand and confront your emotions rather than be their victim.

That’s all for my overview. I could stop here with the note that I’ve found the book extremely helpful, indeed emancipating. But it is hard to write reviews of self-help books without lapsing into autobiography—at least for me it is. Well, here it goes.

The biggest realization I had while reading this book is that much of my anxiety resulted from being out of touch with my emotions. I think Burns would say I had emotional perfectionism, and thus swept a lot of negative feelings under the rug. But lately some kind of interior barrier broke. I suddenly realized that I was sad, and I cried for the first time in many years. It was a huge relief! Now even children’s movies are enough to set me off. I watched Inside Out on the plane ride back from Spain and ended up in tears. My girlfriend was absolutely shocked.

My other main lesson from this book is that fears have to be faced, not shunned. Instead of trying to push away my anxiety—resulting in endless struggle—now I just let it do its work. And the strange thing is that as soon as I stop resisting, the anxiety loses its grip.

To reinforce this lesson, I decided to confront one of my oldest fears—roller coasters. I went out to Coney Island and rode three of them.

When I was a kid, I went on a few roller coasters and hated it. Looking back, I think that’s because I mentally resisted the experience. I kept wishing to stop and get off, and simply wouldn’t accept the fact that I couldn’t do anything but sit there. This time around, I was scared, but instead of resisting it I told myself that there’s no getting off so I might as well try to enjoy it. That made all the difference. The ride itself was actually fun, and not terribly scary. The only difficult part was making myself get on.

And I realized that roller coasters provide a perfect metaphor for anxiety. If you resist the experience and try to wish it away, it’s only going to seem terrifying, pointless, and dangerous. But if you accept the experience and embrace it, you’ll find that it’s harmless fun.

So treat fear like a roller coaster that you can’t get off. Accept the things that scare you, accept your fear, and accept the insecurities, limitations, and imperfections that make you afraid. You can’t wish them away, so you might as well have some fun. 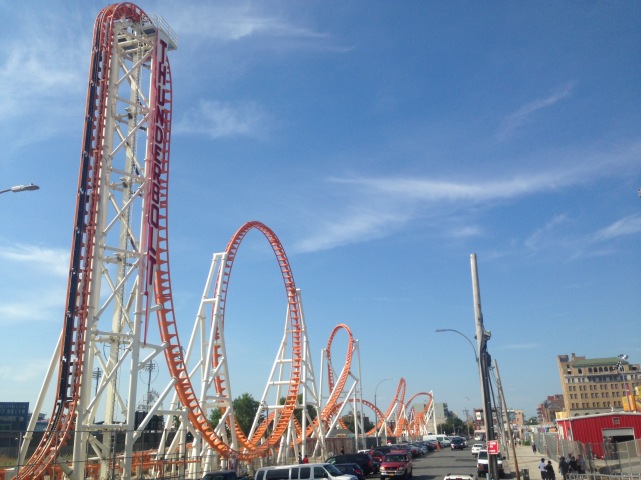 2 thoughts on “Review: When Panic Attacks”